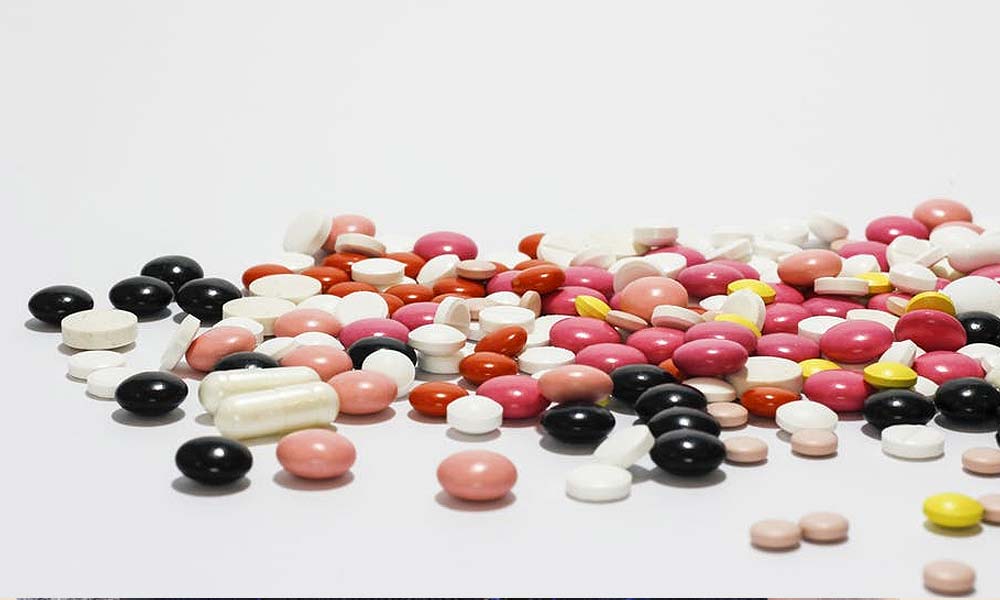 Obtaining prescriptions for medications can be a long, drawn-out experience. This process can be made faster, especially for repeat prescriptions, using digital prescribing.

Digital prescribing refers to the data capture of prescribing to track drug usage and the application of big data analytics to review prescribing trends. Such systems also have the capability to allow pharmacists to verify who drugs are prescribed to, to guard against drug misuse and abuse.

Digital prescribing also provides health services with useful information, from which decisions about drug stocks can be made, as well as capturing big data analytics for when it comes to negotiating drug prices with pharmaceutical corporations. Other useful information that can be gathered and processed includes prescription cost analysis; the number of prescriptions dispensed within a given community; the costs of prescribing and so forth.

There are also time savings to made. For example, with the U.K. National Health Service, the Electronic Prescription Service allows prescriptions to be sent direct to pharmacies through IT systems used in doctor’s surgeries. The long-term aim is to remove the need for most paper prescriptions.

The health service in the U.K. has also taken advantage of a platform called iView which allows for three measures of prescribing data to be made: number of items, net ingredient cost and actual cost, drawn from pharmacies across the country.

The Isle of Man has also embarked on the digitalization of its prescribing process. The Isle of Man is a self-governing crown dependency in the Irish Sea between the islands of Great Britain and Ireland. The head of state is Queen Elizabeth II. The Isle of Man government’s digital strategy has extended to the purchase of a new electronic prescribing system for inpatients at its major hospitals. The new technology was designed in the U.K. and it will go live in 2018.

The aim of the system is to end to paper-based prescribing for inpatients. This means tablets and other mobile devices at the bedside in the hospital in the future. The use of such technology will enable medical staff to access information on a patient’s medication history rapidly. The technology will also enable electronic prescribing, aiding medics with deciding on which treatments to prescribe and at which dosage.

Furthermore, when nurses administer drugs, the dose and treatment times can be electronically captured. This also negates the risk of misinterpreting a prescriber’s intention.

Commenting on the decision, the chief pharmacist and the island’s Nobel Hospital, Alan Pearson, said: “Electronic prescribing is another important stage in the overall digital technology transformation of Noble’s Hospital and the wider health service. There is strong evidence from other health authorities that digital prescribing saves both time and money. What is more, it promotes even greater patient safety with its real-time support and guidance for prescribers.”

In the equation IoT + X = Intelligence, what role can patient and asset data play as the X factor? 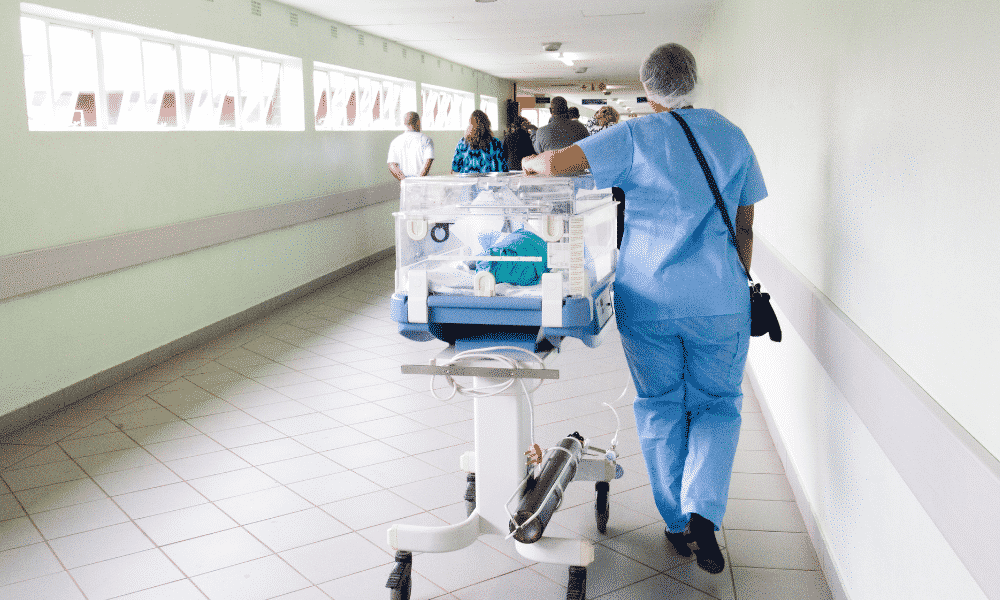 The essential premise of the Internet of Things — that a device can pick up vital information and relay that for processing through a Wi-Fi connection — is systematically shaving off inefficiencies in healthcare. This is especially welcome news in the United States where healthcare spending rose to a crushing $3.6 trillion in 2018, which amounts to nearly 18% of the overall economy.

IoT in healthcare roughly falls into two buckets: Data from patients and data from institutional assets. Here’s where judicious implementation of an IoT strategy helps:

Consumers are already familiar with the Apple Watch or FitBit to monitor physical activity, heart rate, sleep patterns and more. Physicians can rely on condition-specific monitors to deliver more relevant data. Monitoring of glucose levels from diabetics through an IoT-enabled wearable can help track insulin needs and gain a better handle on preventing complications. Such monitoring also empowers patients — they can read levels through a related mobile app — and gives them greater ability to participate in their healthcare strategy.

IoT-enabled wearables/sensors can monitor patient health after they have returned home from major surgeries and automatically alert the hospital if certain vitals look worrisome. Wearable and implantable stickers monitor heart rate. Smart bandages can keep an eye on wounds and watch for infection. Such remote monitoring of fairly routine vitals eliminates the need for the patient to be tethered to the hospital for extended periods after surgery. Remote IoT-enabled monitoring also enables tele-health where physicians can remotely work with patients who report problems. Pre-screening like this has the potential to decrease the need for readmission.

IoT-enabled sensors on medical devices — and even staff — can help track assets more efficiently. Staff can bring X-ray machines and traveling IV units into service as needed, instead of wasting time tracking them down. Such data also helps hospitals forecast device utilization so they can better plan for need. Hospitals can also restrict access to specific drugs by allowing remote IoT-based monitoring of these medicines. Room sensors can read ID badges and only allow approved personnel into sensitive areas.

IoT can spit out data not just about patient health — but also that of machines. If a refrigerator holding critical medicines is about to break down, a sensor connected to the unit can alert maintenance who can proactively attend to the machine before it goes out of order. Healthcare organizations must keep equipment running smoothly and IoT enables them to do so.

By IoT-enabled tracking of assets such as hospital beds and aligning them with patient needs healthcare organizations can dramatically decrease wait times in the emergency room. Mount Sinai Medical Center in New York City has used this strategy to cut wait times for half of its 59,000 annual ER patients.

While IoT is a powerful tool in healthcare, it must also play by the same rules that govern other devices and systems. IoT-enabled healthcare devices go through elaborate certification processes and conform to country-specific patient privacy laws. Since IoT in healthcare will often involve sharing and relaying of sensitive patient health information (PHI), organizations need to encrypt data and remove all identifiers before they can work with them at scale. 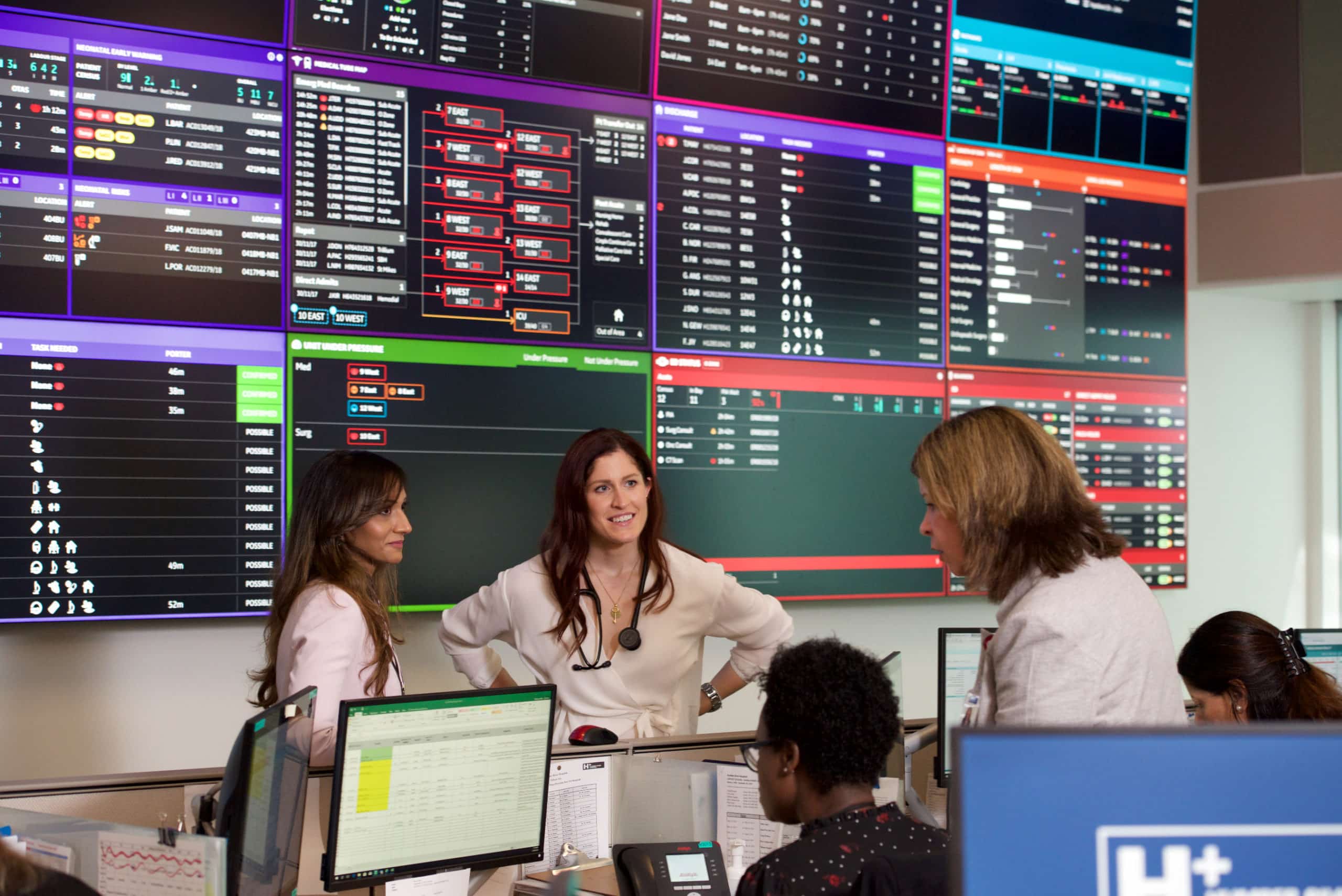 Do the words ‘command centre’ make you think of huge rooms with NASA scientists, expertly making sure a Mars rover lands safely on the Red Planet?

What if a command centre could revolutionize the patient experience in one of the busiest hospitals in North America, bringing a new standard of patient-centered, quality healthcare?

Canadian Patient Safety Institute and Canadian Institute for Health Information data shows that 1 in 18 hospital stays in Canada involved at least one harmful event. This addition to the Command Centre means quicker alerts for clinical staff, and better protection for patients with conditions that make them vulnerable to risks of adverse events, or adverse outcomes.

The Humber River Hospital is the Greater Toronto Area’s (GTA) largest acute care centre, serving a catchment area of more than 850,000 in the city’s northwest. Opening in 2015, it was also North America’s first fully digital hospital.

Just two years later, HRH opened the first generation of its Command Centre, a data-driven ‘mission control’ offering real-time insight on patient flow, via advanced algorithms and predictive analytics. As a result, the hospital has “unlocked” the equivalent of 35 additional beds — and the ability to treat thousands of additional patients.

Get an inside look at HRH’s Generation 2 Command Centre: 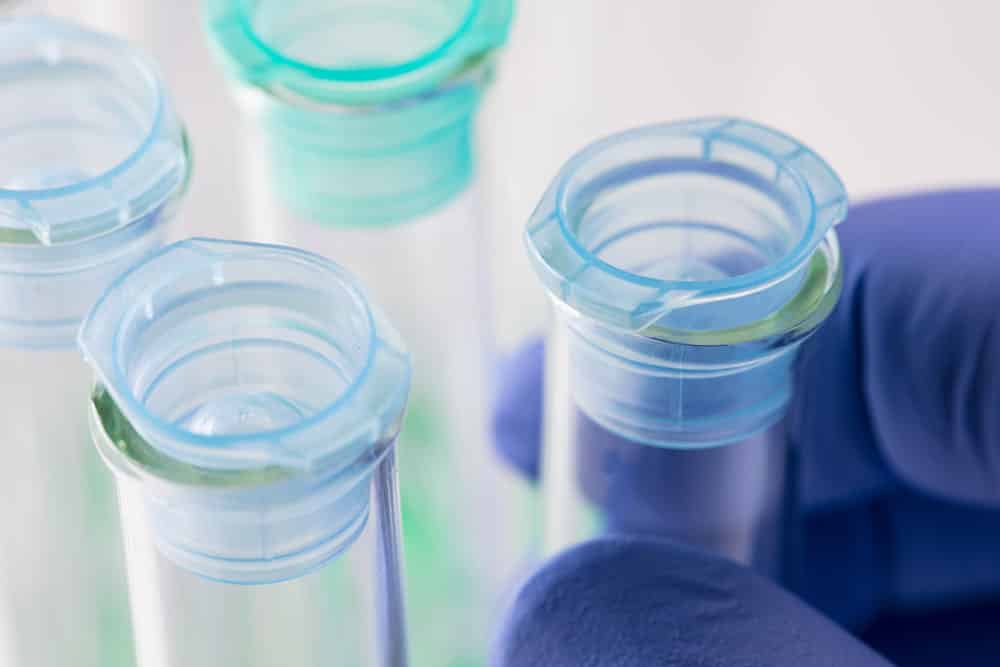 One of the biggest challenges pharmaceutical companies face is with the time taken to discover new drugs, develop them and get them to market. This lengthy process is punctuated with false starts. Startup Deep Genomics uses AI to accelerate the process.

Canadian startup Deep Genomics has been using artificial intelligence as a mechanism to speed up the drug discovery process, combining digital simulation technology with biological science and automation. The company has built a platform which uses machine learning to delve into the molecular basis of genetic diseases. The platform can analyze potential candidate drugs and identify those which appear most promising for further development by scientists.

The drug development process is dependent upon many factors, such as those relating to combining molecules (noting the interactions between hundreds of biological entities) and with the assessment of biomedical data. The data review required at these stages is highly complex. For these reasons, many researchers are seeking algorithms to help to extract data for analysis.

According to MaRS, Deep Genomics is addressing the time consuming element involved in the initial stages of drug discovery. The artificial intelligence system that the company has designed is able to process 69 billion molecules, comparing each one against around one million cellular processes. This type of analysis would have taken a conventional computer (or a team of humans) many years to run the necessary computations.

Within a few months, Deep Genomics AI has narrowed down the billions of combination to shortlist of 1,000 potential drugs. This process is not only faster, it narrows down the number of experiments that would need to be run, saving on laboratory tests and ensuring that only those drugs with a high chance of success are progressed to the clinical trial stage.

This type of system goes some way to addressing the lengthy typical time to market, which stands at around 14 years for a candidate drug; as well as reducing the costs for drug development, which run into the billions of dollars per drug.