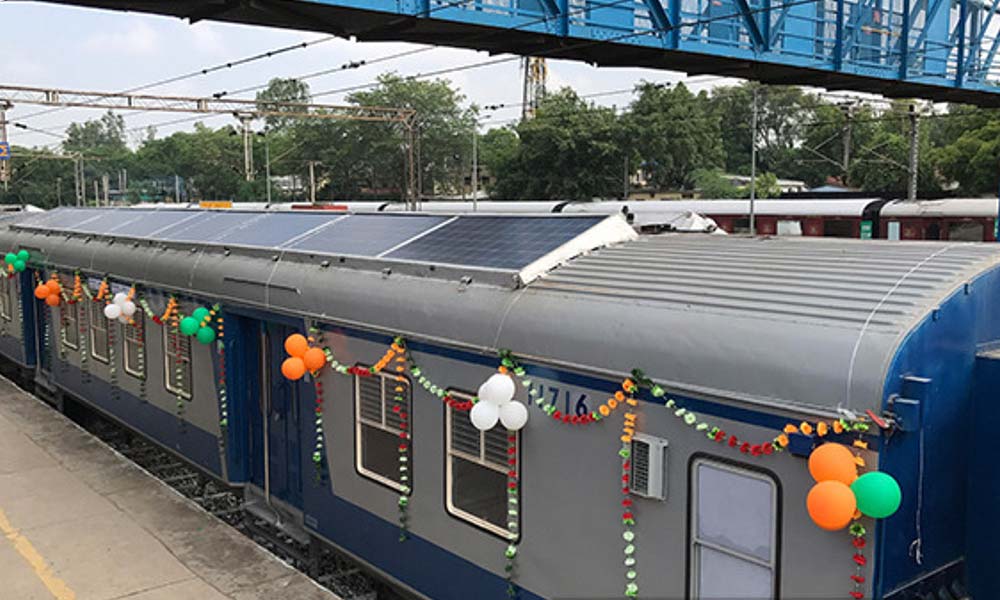 New Delhi – Indian Railways is the largest rail network in Asia and a huge consumer of diesel fuel. However, this is all about to change with the debut in New Delhi of it’s Diesel Electric Multiple Unit (DEMU) with solar-powered coaches.

The train was rolled out in New Delhi, one of the world’s most polluted cities on July 14. According to a press release, the Minister of Railways Shri Suresh Prabhakar Prabhu dedicated the 1600 HP DEMU train to the nation. The minister said the government was dedicated to conserving the environment and using more clean energy.

The entire electricity needs of the rail coaches are supplied by solar panels installed on the roofs of the cars. The panels will supply power for lighting and fans, as well as an Information Display System. The solar system also includes a smart MPPT inverter that optimizes power generation on the moving train so that power will even be generated during the night.

The six solar-powered coaches are each equipped with 16 solar panels, capable of generating 300 watts each, giving each coach a peak capacity of 4.5 kilowatts. The system allows 20 kilowatt-hours of clean power to be generated per day. Additionally, a 120 AH battery system will store excess power generated during peak hours.

Indian Railways has plans to install solar panels on 24 more trains in the next six months. The railway company estimated that just one train with six solar-powered cars can save 21,000 liters (5,547 gallons) of diesel fuel per year, at cost savings of around Rs12 lakh (almost $20,000), reports Engadget.

Indian Railways runs around 11,000 trains daily, moving about 13 million passengers every day. To say the least, the fuel bill is incredible. In 2015, Indian Railways spent Rs16,395 crore ($2.5 billion) on diesel fuel. In trying to reduce their diesel consumption and become more reliant on solar energy, the company figures they can save up to Rs41,000 crore ($6.31 billion) over the next 10 years.

Meeting the challenge of installing solar panels for a moving train

The coaches were manufactured by the Integral Coach Factory (ICF), a part of Indian Railways, while the solar panels and solar systems were developed and fitted by the Indian Railways Organisation of Alternative Fuel (IROAF) in Delhi, according to the press release.

JaksonEngineers Ltd in Noida, Uttar Pradesh, under the guidance of IROAF, actually developed the new solar panel system used on the coaches. Sandeep Gupta, Vice Chairman and Managing Director of Jakson Engineers Ltd told Business Standard, “It is not an easy task to fit solar panels on the roof of train coaches that run at a speed of 80 kilometers (50 miles) per hour.” He pointed out the solar panels feed into an onboard battery that can store surplus power.

It’s one thing to power a train coach with solar, but the bigger challenge is powering a train with an electric engine. Electric trains are definitely the best mode of transportation when it comes to reducing carbon emissions, particularly when the electricity comes from renewables.

This is where innovative solutions, like track-side solar panels, would be feasible. But in using India as an example, inadequate distribution and transmission infrastructure will hold the country back in meeting its aggressive target of 100GW of solar PV capacity by 2022. But think of the savings in diesel fuel that would be realized with a complete conversion to electric trains powered by solar.

Advances in AI will aid in autonomous industrial inspections

Toronto is the fastest-growing tech market in North America