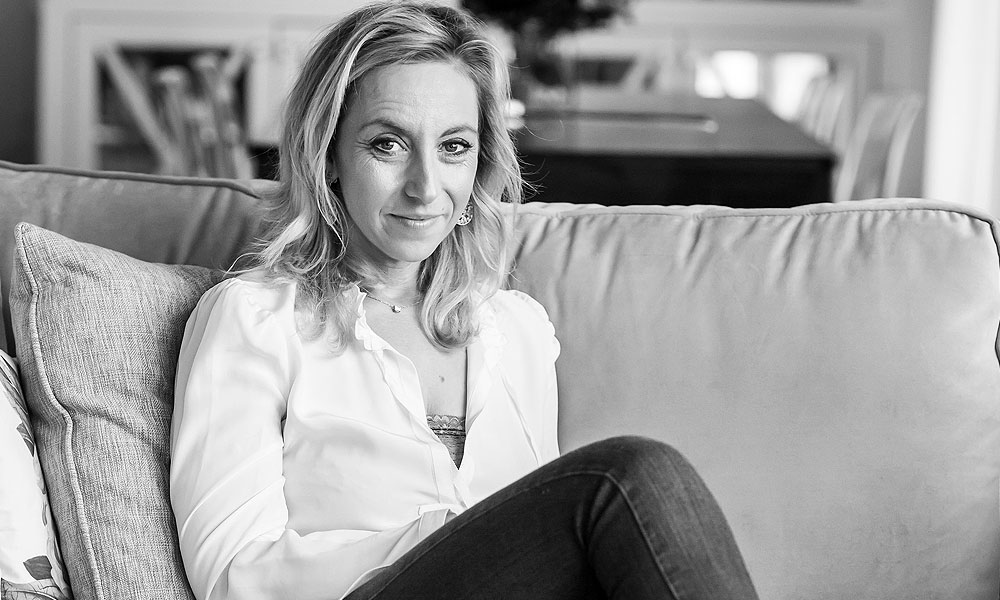 Diversity and inclusion in the workforce won’t happen because you wish it – you must take action, says #MoveTheDial Founder & CEO, Jodi Kovitz.

“Many women talk about critical turning points where someone, in a really small moment in their career, gave them an opportunity for step changes,” Kovitz told DX Journal. “If you go to a meeting with your executive team, ask if you can bring a young woman with you so she can learn. Give her a chance to contribute or make an introduction. Then get out of the way and empower her to rise to her own potential.”

#MoveTheDial was started in January 2017 when Kovitz ran the organization off the side of her desk as CEO of AceTech (now PeerScale). In January she moved into a full-time role at #MoveTheDial and has landed corporate backing from founding partners such as CIBC, TD, Osler, TWG and WealthSimple.

The mission is clear: Increase the participation and leadership of all women in tech.

“[A commitment] cannot live in an annual report, or in a strategic plan in a drawer,” Kovitz said. “It takes an active commitment at the strategic top of the house. They have to go out of their way to make it happen.”

As part of #MoveTheDial’s mission, Kovitz has been studying relationships and patterns of companies where inclusiveness is more common and where more opportunity exists for women. One of the commonalities is women being invited to a meeting, event, presentation or coffee meeting that was outside of her normal daily routine.

“Some women talk about being given a moment they didn’t think they deserved, but it was a career opportunity for step change,” Kovitz said.

Indeed, studies have shown women are more likely than men to suffer a “confidence gap”, as The Atlantic explored, where some women underestimate their abilities and performance. Kovitz has found a practical way to address this in the workplace: leadership teams and colleagues can step up by inviting women to step forward more.

Where the dial is today

No matter whose numbers you look at, it’s clear there is a lot of work ahead.

At a board level, 70 percent of startups have no women on their boards of directors. 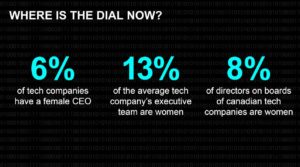 While there still is a lot of work to do to, Kovitz does believe progress is taking shape around inclusion and awareness has improved. Some examples:

Moving the dial at startups VS large enterprise

While there are exceptions to every rule, Kovitz believes larger enterprises are further ahead when it comes to creating a culture of inclusiveness and diversity.

“When you’re scaling as fast as so many tech companies have to, it requires a high degree of intentionality,” she said. Kovitz said speed of growth, urgent need for talent and investor pressure are among some of the reasons startups and scaleups don’t take the time to pause and conduct a talent search that is inclusive.

Kovitz said she has found herself having to stop and deliberately design an inclusive search and hiring process now that she is running her own company, because speed of growth can quickly become consuming if you don’t curb it.

Many large enterprises have also moved the dial further along by setting up initiatives such as inclusion teams, throwing more funding at inclusiveness and setting out to build cultures of belonging.

She notes Microsoft, Google and Cisco are pushing forward to move the dial. Microsoft, for example, is using its platform to push for tangible change in the number of women in STEM industries (here’s a March 7 blog post on the subject).

Kovitz’s hope is that one day we won’t need to talk about the gender of a leader because inclusiveness will be more commonplace.

“Hiring a diverse talent pool should be as important as revenue,” Kovitz said. “If you don’t do it from the outset, it’s very tricky to backfill it later. You can’t hire someone that looks like you just because it’s comfortable,” she said. “It takes more time to go broader.”

Q&A: Paul Teshima, CEO & Co-founder, Nudge.ai, on how to build a sales team that scales

U.S. labor officials proposed a rule change that could make it easier for gig workers to be entitled to benefits. 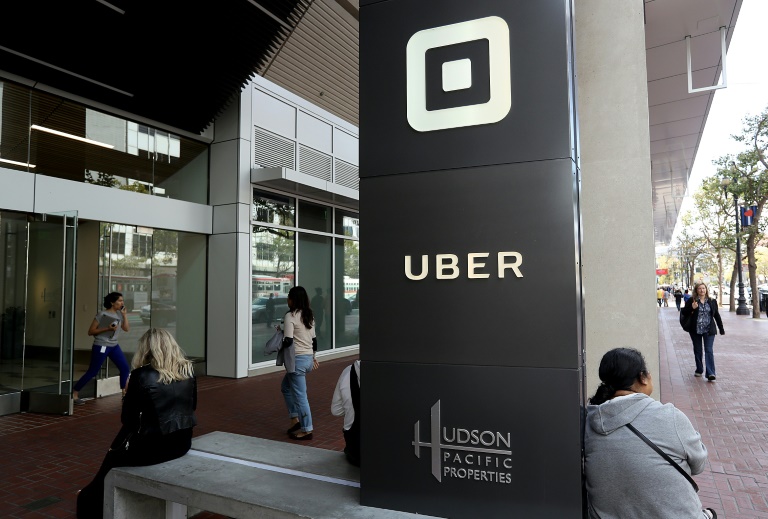 United States labor officials proposed a rule change Tuesday that could make it easier for gig workers such as Uber drivers to be reclassified as employees entitled to benefits.

The move by President Joe Biden’s Labor Department would lower a bar set by his predecessor regarding when someone is considered an employee instead of a contract worker.

It also comes as “gig economy” companies from rideshare platforms to food delivery services strive to maintain the status quo.

The new formula includes factors such as how long a person works for a company and the degree of control over the worker, as well as whether what they do is “integral” to a business, according to the proposed rule.

“We believe the proposed regulation would better protect workers from misclassification while at the same time providing a consistent approach for those businesses that engage or wish to engage with independent contractors,” Jessica Looman of the US Department of Labor said at a press briefing.

Being classified as employees would entitle workers to sick leave, overtime, medical coverage and other benefits, driving up costs for companies such as Uber, Lyft and DoorDash that rely on gig workers.

The proposed rule change is subject to a 45-day public comment period, meaning there is no immediate impact, but share prices took a hit on the news.

Uber and Lyft shares ended the formal day down more than 10 percent, while DoorDash was down nearly six percent.

“It’s a clear blow to the gig economy and a near-term concern for the likes of Uber and Lyft,” despite uncertainty about how the new rule might be interpreted across the country, Wedbush analyst Dan Ives said in a note to investors.

“With ride sharing and other gig economy players depending on the contractor business model, a classification to employees would essentially throw the business model upside down and cause some major structural changes if this holds.”

Uber and Lyft have consistently argued that their drivers want independence, provided benefits are added to the mix.

In California, the cradle of the gig economy, voters in late 2020 approved a referendum backed by firms such as Uber that preserved keeping drivers classified as independent contractors.

The measure effectively overturned a state law that would require the ride-hailing firms and others to reclassify their drivers and provide employee benefits.

The vote came after a contentious campaign with labor groups claiming the initiative would erode worker rights and benefits, and with backers arguing for a new, flexible economic model.

How can organizations attract and retain IT talent? 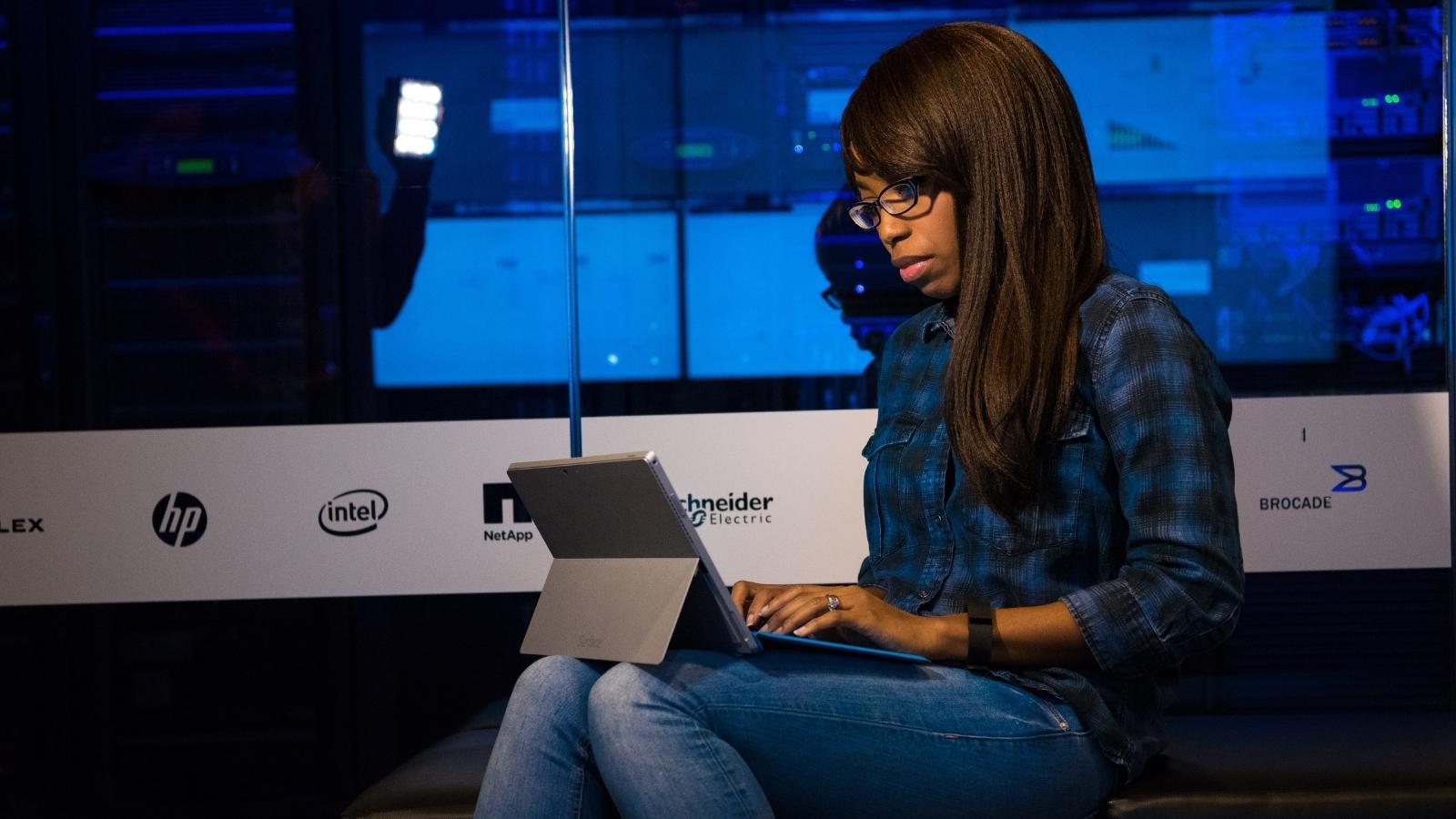 One of the biggest stories in digital transformation right now? Attracting and retaining IT talent.

According to Gartner, the labor market has tightened in the last two years. They report that:

Amid stories from the ‘Great Resignation,’ workers in all industries are pushing for higher compensation, better benefits, and increased flexibility — and IT talent is no exception. In fact, Gartner’s Global Labor Market Survey found that compensation is the top driver for IT talent attraction and retention. According to a recent Gartner IT Compensation Increase Poll, 50% of organizations reported increasing the salaries of key employees after they received a separate job offer — all in a bid to retain this talent.

How can organizations effectively attract talent and, most importantly, retain these employees? Gartner has outlined three ways.

As Gartner explains, “In order to pinpoint where additional funding will be necessary to address pay gaps in the short term, work with your HR team to identify IT roles and skills areas facing higher attrition risk and recruitment challenges due to noncompetitive compensation.”

Build flexibility into IT compensation through variable pay programs

“One way to minimize locking in compensation adjustments as long-term fixed costs,” explains  Lily Mok, Gartner VP Analyst, “is to use variable pay components that can be adjusted or removed as talent needs and market conditions evolve.”

Examples of these include skills-based premium pay, a signing bonus (lump sum or split up), and retention bonuses (eg. during a major period of transition).

Make sure managers can have successful pay-related conversations

According to Gartner, there are three important elements needed to make sure these conversations are effective.

First, never forget empathy — especially since finances are a very personal topic and can be a sensitive issue.

Finally, be transparent about the organization’s pay structure, and how pay rates are set. After all, there are many sites out there (eg. Glassdoor) that features self-reported public pay data.

How will CIOs define success in 2021? 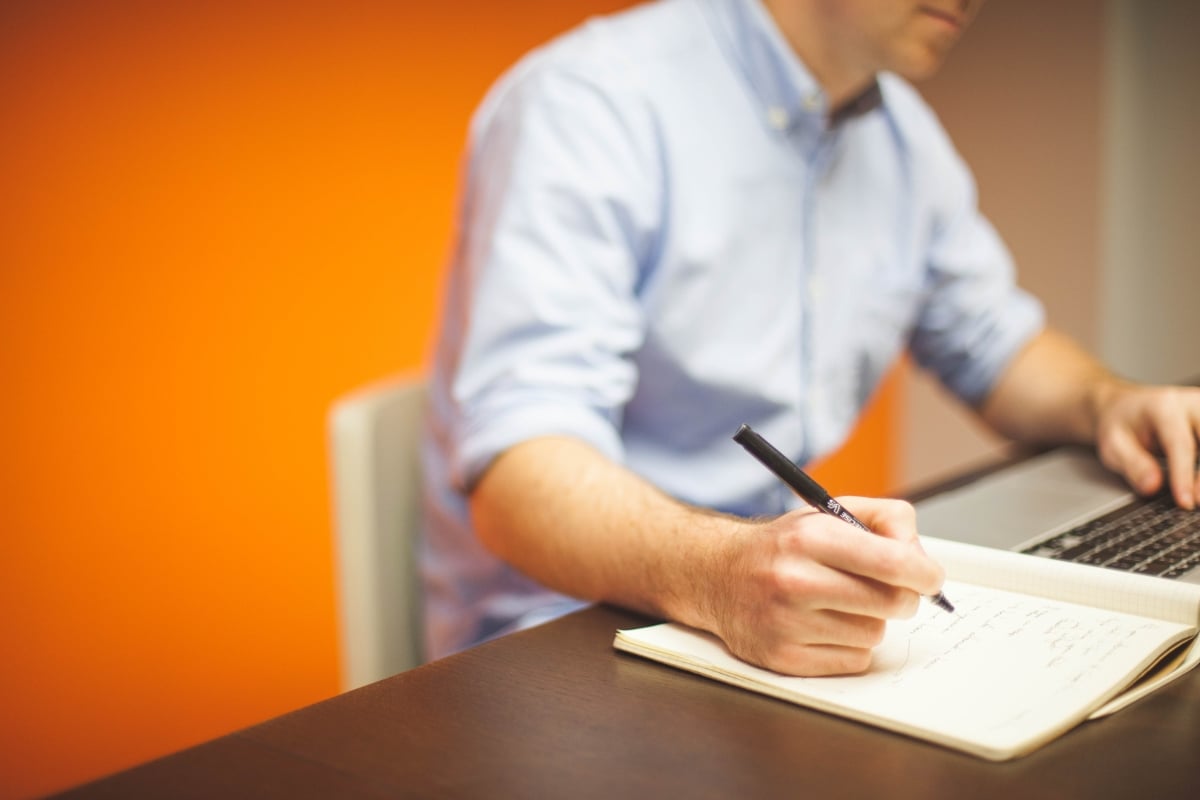 Recently, we reported IDC’s 2021 predictions, which noted that while CIOs have faced epic-level challenges this year, they’ll need to be in the front seat of the upcoming economic relief efforts.

At the top of IDC’s list was the prediction that by 2022, “65% of CIOs will digitally empower and enable front-line workers with data, AI, and security to extend their productivity, adaptability, and decision-making in the face of rapid changes.”

Since then, Gartner has also chimed into the CIO + Future of Work discussion. They identified “automation of routine work with AI, digital dexterity, and hybrid work with distributed workforce” as areas CIOs should focus on.

Now, a new report (based on a survey of over 100 Fortune 500 CIOs) from digital adoption platform WalkMe has uncovered how CIOs and IT organizations will define success in 2021, expanding on these aforementioned trends.

CIOs are determined to get more out of their existing tech in 2021 according to the new @constellationr report.

In The CIO Outlook 2021, WalkMe — who commissioned Constellation Research for the report — found that 77% of CIOs list automation and AI as key to improving the effectiveness of IT. 59% say ROI from IT can be achieved through portfolio assessment and rationalization.

“CIOs are prioritizing overall digital change, keeping the organization safe, and improving the worker condition,” says WalkMe. Looking ahead, “CIOs must invest in finding the right models for enabling remote work while supporting their users.”

In order for organizations to adapt to change and become future-proof, CIOs need a multi-pronged approach, featuring:

“This data, gathered from top CIOs around the world, shows that they will be seeking dramatic improvements, especially significantly higher ROI (10-20 percent+) from their IT investment next year.”

Want to read the full report? Find it here.