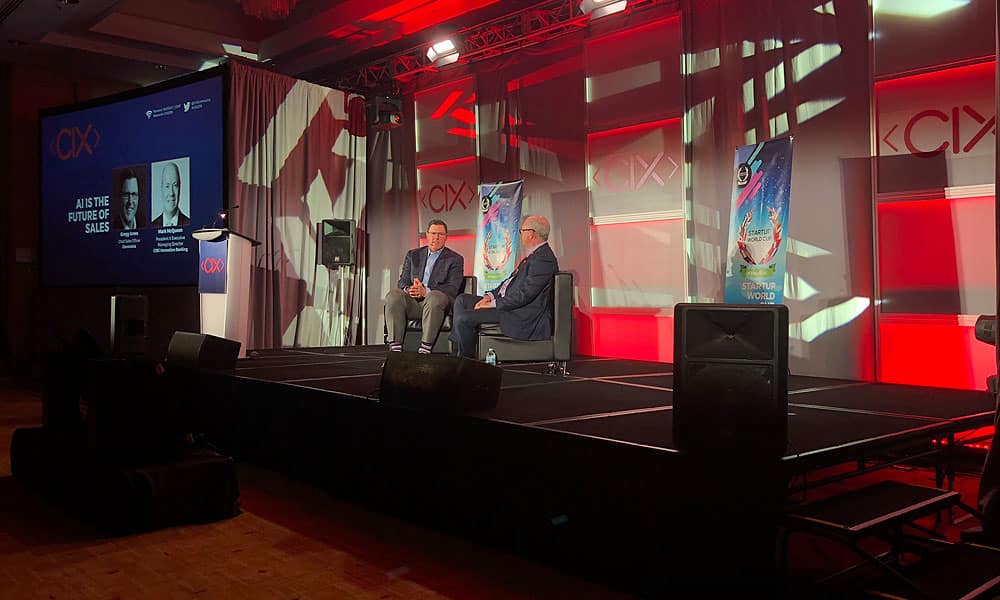 There’s no turning back: We are officially neck-deep in the AI-ification of everything.

According to some estimates, more than 75 percent of companies are using artificial intelligence for business development, workflow automation and to improve customer experience.

But not all AI is created equal, and there is still a lot of learning to be shared in the world of tech about what works and what doesn’t.

To learn more about how AI is transforming the sales and marketing worlds, we caught a fireside chat between Mark McQueen, President & Executive Managing Director of CIBC Innovation Banking, and Gregg Ames, Chief Sales Officer of Conversica, at the Canadian Innovation Exchange in Toronto.

The discussion ranged from Ames’ recent experiences building up Conversica’s AI tools for sales and marketing companies, to his time with marketing automation company Marketo. But AI’s importance across multiple industries was the topic capturing all the attention.

Here are the major takeaways from the fireside chat:

People and machines are meant to work together

According to Ames, the notion of the hybrid workforce – where humans work with artificial intelligence – should be exciting to everyone. While the conversation often starts with the discussion surrounding job replacement, Ames said it’s chiefly a question of growth.

“It’s about doing more, not about replacing humans,” he said.

Conversica is an AI-driven lead engagement platform used by marketers and sales teams. The platform promises to “find and secure customers more quickly and efficiently by automatically contacting, engaging, qualifying and following up with leads via natural, multi-channel, two-way conversations.”

The company has raised $72 million in financing, including an $8.5 million from Wellington Financial (now CIBC Innovation Banking).

Ames argues that AI-based solutions are better at accomplishing certain tasks, which ultimately frees up human capital to do things people are better at.

For example, traders who work at exchanges today aren’t working on their own – they’re benefitting from the help of algorithm and AI systems that automate workflow and aim to surface insights that people can use.

Within Conversica itself, Ames says humans will focus on high-value functions such as engaging with customers, and don’t have to bother with AI-driven efforts to take on menial tasks such as scheduling follow-on appointments.

In automotive, where the bulk of Conversica’s customers came from, Ames said that AI is being used to help companies build valuable, long-term relationships and engagement with customers.

In finance, companies are turning to AI as a way to better manage collections and engage with customers to create payment plans.

There are countless use cases where AI helps humans make better decisions, faster. 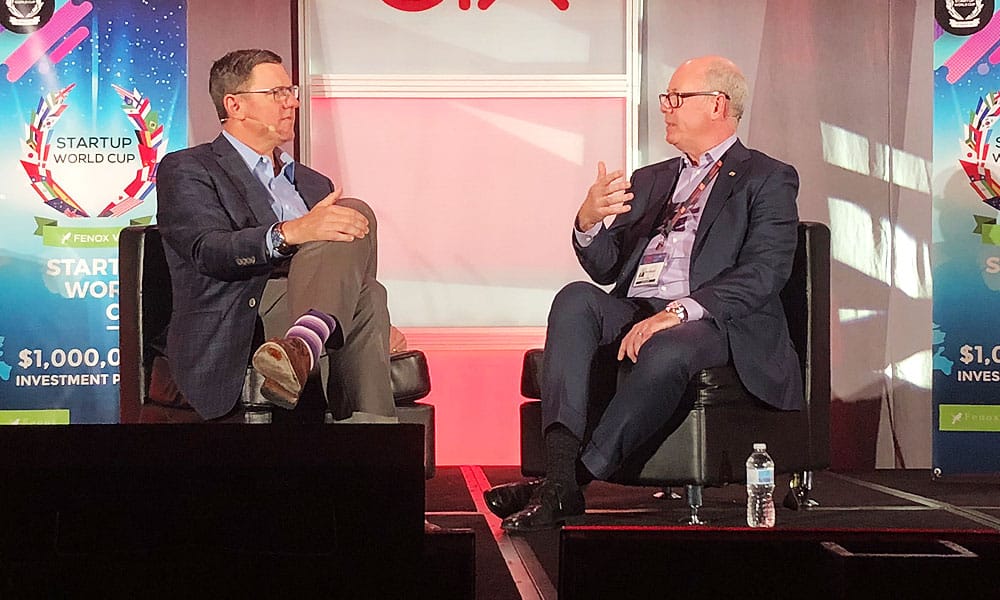 We’ve moved from automation to AI

If anyone can speak to the evolution of marketing and sales in technology, it’s Ames – he was employee No. 60 with Marketo, a marketing automation business, for nearly six years. The company was acquired by Adobe this year for $4.75 billion after building out a network of 500 partners and 5,000 customers.

Ames thinks the disruptive potential that automation delivered to marketers and salespeople five years ago is comparable to how AI is reshaping businesses across multiple industries today.

Ames said he’s learned a lot about how to bring a disruptive new market idea to businesses, but he’s doing things a little differently now.

While Marketo pushed hard for new customers, the approach at Conversica is different.

With Conversica, Ames’ sales team is focused on deploying with customers where deep impact is possible, and having so many customer deployments allows the business to make predictions on where success is likely to emerge for Conversica’s customers.

“Make sure the juice is worth the squeeze”

Conversica’s AI Sales Assistant is now used by an more than 1,200 companies worldwide. The company is currently operating in North America and recently acquired Chilean rival Intelligens. The company is also looking to open a new office in the U.K.

But rapid growth is not the plan, said Ames.

Not every customer is created equal, and Conversica makes a big effort to place the right bets when it comes to picking its customers.

Rather than bending the company’s initial mission statement to suit any and every client’s needs, Ames said the company is looking to push its original concept and to repeatedly sell it as it scales.

The goal is to ensure the company can continue to deliver on its core message, that AI sales and marketing tools are helping customers build better businesses.

Collision returns to Toronto with more than 35,000 planned attendees

Nicknamed ‘The Olympics of Tech,” Collision 2022 is back live after two years. 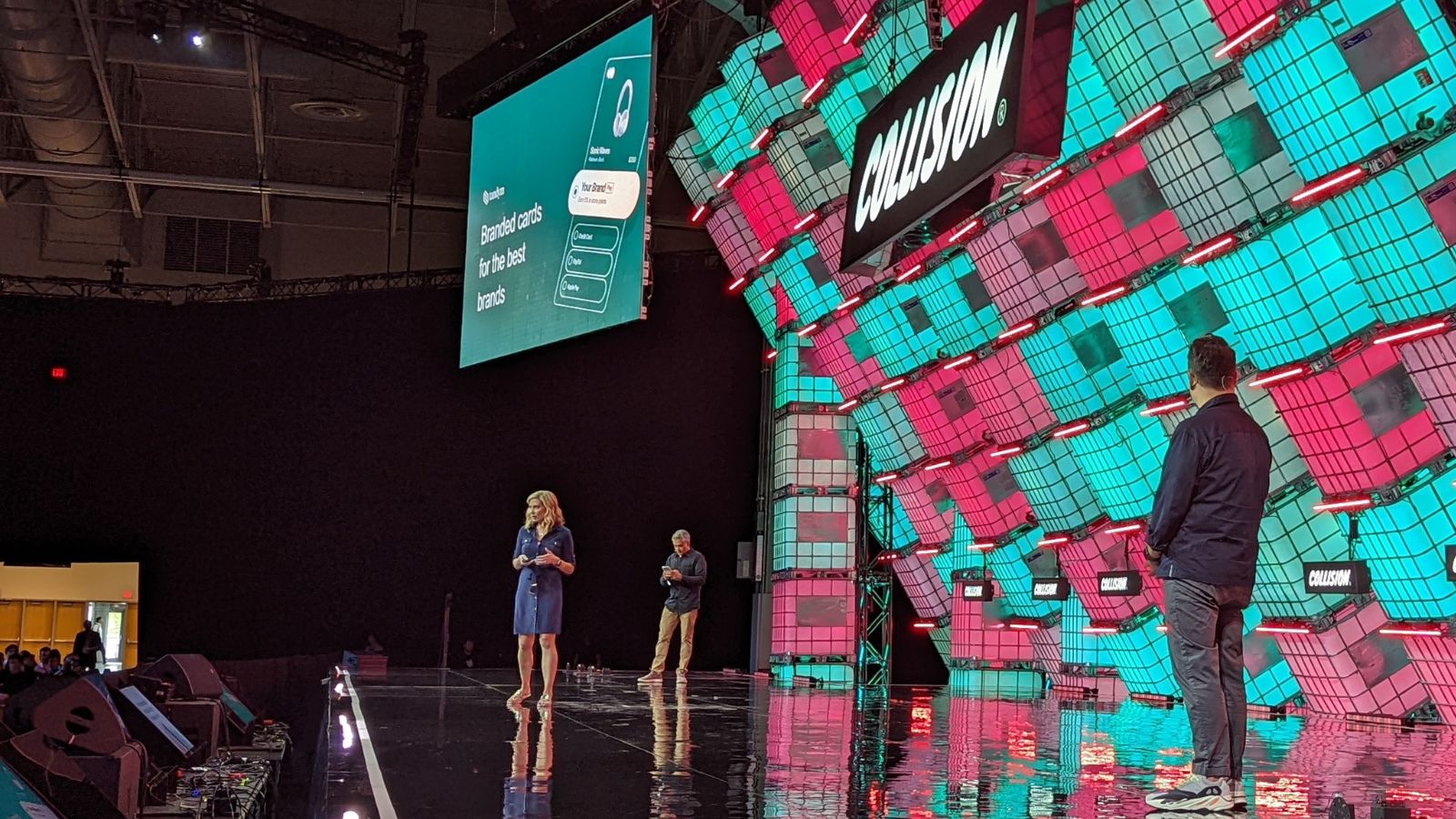 It’s been called “The Olympics of Tech.”

North America’s fastest-growing tech conference takes place June 20-23 at Toronto’s Enercare Centre. It is part of a series of technology conferences that include Web Summit in Europe and RISE in Hong Kong.

Welcoming attendees back after the 2020 and 2021 virtual editions of the conference, Paddy Cosgrave, founder and CEO of Collision & Web Summit said, “I just can’t tell you how excited I am to be back,” before introducing Toronto mayor John Tory.

“The numbers of people that come to this conference demonstrate the eagerness that everyone has to be together after a long pandemic,” said Tory. “It speaks to the impact of Collision itself, that so many people are here.”

Tory then outlined why Collision is right at home in the city of Toronto: “This is one of the fast-growing tech conferences in the world, for a reason, and there is a reason that Toronto is hosting it.”

“If you’ll forgive me a moment of truthful immodesty, we have cemented ourselves as a global hub for technology and innovation,” said Tory, before welcoming attendees to explore the city and see what it can do for their businesses.

“You can be part of this Toronto success story.”

To warm up the audience, however, a series of breakout startups presented their pitches, as a preview of what’s in store for attendees this week. Eight startups, three of which are Indigenous-owned (see asterisks), came to the stage. Startups featured were:

Collision and the state of the world

Collision is coming back at an interesting, particularly volatile time for the global economy and tech market. Inflation has skyrocketed, and the costs for everything from basic groceries to buying a car or home has led to a tremendous feeling of uncertainty.

For starters, recent weeks have seen the cryptocurrency market crumble, with even long-term investors starting to think of exiting the space. CNBC recently reported that the price of bitcoin fell more than 9% in 24 hours to $18,642.22, as of about 2 p.m. ET on Saturday, June 18.

Venture Capitalists have been pouring money into startups throughout the pandemic, at what we can now call an unsustainable level. The result? Overvaluation — a big risk to employees, as one CEO wrote for Forbes.

Ultimately, there is an air of optimism coming from Collision, where an enthusiastic and packed crowd were eager to kick off the event.

Attendees will be able to choose from an absolutely massive selection of sessions, across several tracks and curated lists of sessions.

With the aforementioned crypto crash at the top of many minds, the crypto track, featuring sessions like Mass Adoption: Crypto’s next challenge and How to regulate cryptocurrencies, is sure to be popular.

Those interested in startups can look forward to sessions like How Calgary is winning the global talent competition, How to recession-proof your startup, and 3 big mistakes founders make when building early-stage tech teams, among others.