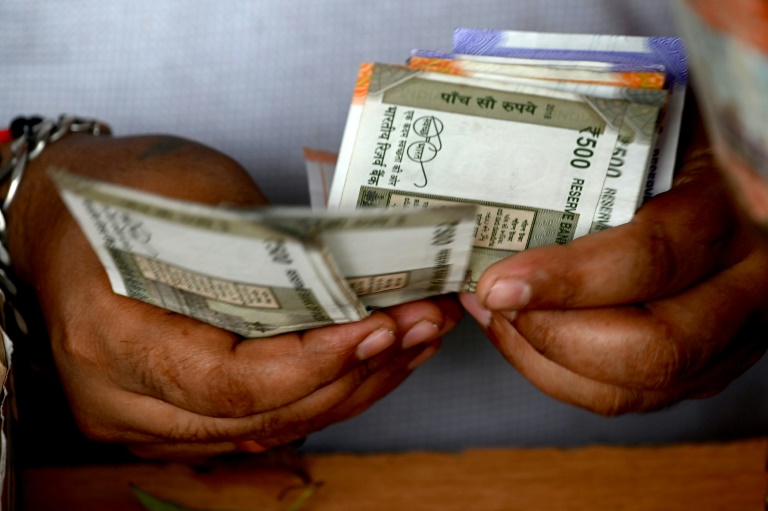 The Indian rupee plunged to an all-time low against the greenback on Monday, as US monetary policy tightening roiled sentiment and foreign investors continued to dump domestic stocks.

Rising oil prices and a strengthening US dollar have weighed heavy on the rupee with a surprise rate hike by the Reserve Bank of India (RBI) last week doing little to stem capital outflows.

The rupee fell past its previous record low of 76.98 against the US dollar in March to 77.56 on Monday.

The fall came as Indian stocks on the benchmark Sensex and Nifty50 indices extended losses for a fourth day, falling more than one percent each on Monday before recovering ground later in the day.

Banks, metals and oil and gas stocks declined the most, with market heavyweight, the conglomerate Reliance, losing more than 3.0 percent following its quarterly results reported late on Friday.

The war in Ukraine and resurgence of Covid-19 restrictions in China have exacerbated outflows from emerging markets like India as foreign funds turn risk-averse.

Inflation worries on the back of rising commodity prices have also soured sentiment in Asia’s third-largest economy, which imports more than 80 percent of its oil needs.

Consumer price inflation in India hit a 17-month high of 6.95 percent year-on-year in March, and economists expect data to be released later this week to show that number rising beyond seven percent in April.

The US Federal Reserve last week hiked the key lending rates by half a percentage point, but also held off on signalling more aggressive measures.

“After an unscheduled rate hike by the Reserve Bank of India, if India’s inflation moves higher than 7.0 percent… the pressure will be on for the RBI to act again,” forex firm OANDA’s Jeffrey Halley said in a note.

“That may give some strength to the rupee but is unlikely to be bullish for local equities.”

India’s forex reserves declined for an eighth consecutive week, slipping below $600 billion in the week ending April 29 as the central bank sold foreign currency in an effort to stabilise the rupee.

Indonesia maintains steady growth in first quarter thanks to exports 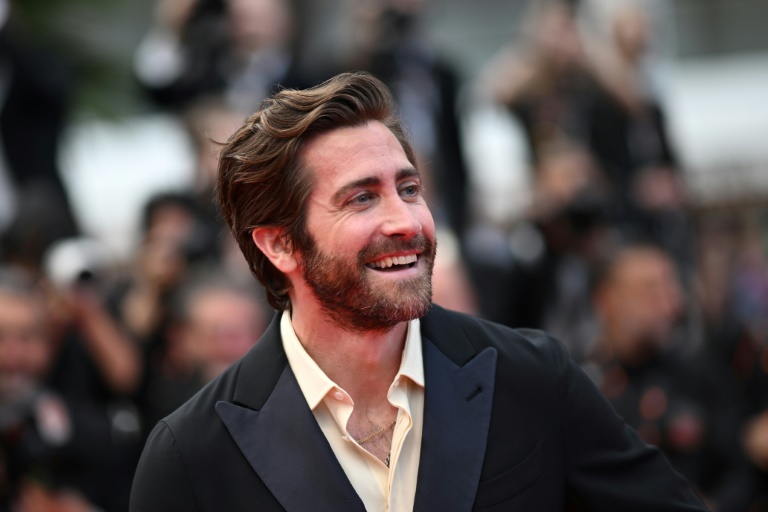 Disney will not release blockbuster animation “Strange World” in French cinemas, it said Wednesday, in protest against the country’s strict streaming rules.

Under French law, the company’s streaming platform, Disney+, would have to wait 17 months to show the movie after its release in cinemas, which had been due in November.

“Strange World” is one of its most-anticipated releases of the year, with Jake Gyllenhaal voicing the lead character in the English version of the fantasy adventure tale.

France has tried to prevent streaming platforms from undermining its large cinema network and the TV stations — notably Canal Plus — that finance many of its films and get a shorter wait for prime releases.

The National Federation of French Cinemas said it “protested with the greatest vigour against Disney’s desire to deprive the French of its Christmas animated film.”

The debate over how long to wait between cinema and streaming releases has also been fierce in Hollywood — though with much shorter delays being considered.

After trying various strategies at the height of the Covid-19 pandemic, the US industry has settled on 45 days as the optimum gap.

Scarlett Johansson sued Disney last year for loss of earnings after it released “Black Widow” simultaneously to cinemas and streamers.

Even a 45-day window was reportedly not enough for Tom Cruise, who is rumoured to have launched legal action against Paramount to get a longer delay for his next “Mission: Impossible” instalment next year.

So far, Disney has no plans to pull “Lightyear” from French cinemas — the “Toy Story” spin-off is due later this month.

But the fate of other massive productions — including sequels to “Black Panther” and “Avatar” — rests in the balance.

“We continue to evaluate the situation film by film and country by country,” said Disney’s Etzi.

Global clothing giant Inditex, which owns Zara, posted Wednesday a surge in its first-quarter profits despite closing its stores in Russia after its invasion of Ukraine.

The world’s biggest fashion retailer said its net profit increased by 80 percent in the first three months of its financial year to April 31, compared to the same period last year.

The hike in profits came despite a 216-million-euro provision for estimated costs arising from the impact of the Ukraine war, without which its income would have risen to almost “940 million euros”, it said.

The group, which since April has been led by Marta Ortega, daughter of its multi-billionaire founder Amancio Ortega, reported sales of 6.74 billion euros, up 36 percent from the same period in 2021.

The fashion group, which owns eight brands including upmarket Massimo Dutti and teen label Stradivarius, had warned that 2022 sales would be impacted by Russia’s invasion of Ukraine.

After Russia sent in troops in late February, Inditex closed all its stores in Ukraine and on March 5 suspended all retail activity in Russia, its biggest market after Spain, shutting its 502 shops and suspending all online transactions.

Inditex said that stopping sales activity in Russia had been offset by “strong growth” in other regions, notably the United States.

Analysts had expected the Spanish retail giant to be hard hit by its Russian pullout decision given that it generates 10 percent of its turnover and 8.5 percent of its operating profit in the country.

Wednesday’s results were broadly in line with analysts’ expectations, with Factset seeing profits of 770 million euros against a turnover of 6.27 billion euros.

Online sales, which had surged during the pandemic, fell by 6.0 percent, although Inditex said it expected the figure to reach “30 percent of total sales” by 2024.

Shares in the world’s biggest fashion retailer were trading 4.23 percent higher in late morning trade on the Madrid stock exchange.

When the pandemic first took hold two years ago, the group saw its profits nosedive as the virus forced it to shutter most of its shops in the first half of 2020.

US President Joe Biden heads Wednesday to a Latin America summit on a mission to woo back the region as his administration pushed out pledges, including a plan to train half a million health workers.

The long-awaited Summit of the Americas was marred by a boycott from Mexico’s president, who was upset that Biden did not invite the leftist leaders of Cuba, Nicaragua and Venezuela on the grounds that they did not meet democratic standards.

The Biden administration insisted there were no hard feelings and moved forward on initiatives aimed at cementing ties across Latin America, where a rising China has increasingly made inroads despite the historic US influence.

Hours before Biden was to arrive, his administration announced a new Americas Health Corps that will aim to improve the skills of 500,000 health workers across the region, building on the lessons from Covid-19, which hit the Western Hemisphere especially hard.

The health training will cost $100 million, although the United States will not contribute all of it and will seek to raise funds, including through the Pan American Health Organization.

The pandemic “showed us the many cracks in our global health systems and underscored the importance of strong and resilient health systems for the entire population,” a White House statement said.

China has stepped up its role in Latin America since the pandemic started, moving early to supply vaccines.

Cuba has also long exported its state-employed doctors, a practice that so infuriated the previous administration of Donald Trump that he suspended funding for the Pan American Health Organization over alleged ties.

The health announcement comes a day after Vice President Kamala Harris detailed another $1.9 billion in commitments by businesses to invest in impoverished and violence-ravaged El Salvador, Guatemala and Honduras.

The troubles in the so-called Northern Triangle, as well as Haiti, have generated a soaring number of migrants to the United States, setting off a domestic furor as Trump’s Republican Party demands efforts to stop them.

“We know the American people will benefit from stable and prosperous neighbors. And when we provide economic opportunity for people in Central America, we address an important driver of migration,” Harris said.

Mauricio Claver-Carone, the president of the Inter-American Development Bank (IADB), said that Latin America can increasingly be seen as a “sea of peace” for investors amid the global turbulence from Russia’s invasion of Ukraine and rising risks associated with manufacturing juggernaut China.

The head of the IADB, which provides development funding in Latin America, said he saw a rise of “nearshoring,” with businesses moving closer to markets rather than in China.

Since the first Summit of the Americas in 1994, “each dollar that went to China was one dollar, one investment, one job less for Latin America and the Caribbean,” he told AFP in an interview in Los Angeles.

The first summit, held in Miami by Bill Clinton, aimed to create a vast free-trade zone that would span the hemisphere other than communist Cuba.

Biden is holding only the second Summit of the Americas on US soil at a time that the political appetite for free trade has waned in Washington, with Trump rising to power in part by attacking trade liberalization as hurting workers.

But Biden has stood firm on another core principle of the Summit of the Americas — democracy — even as he considers going next month to Saudi Arabia, a critical oil supplier.

Mexican President Andres Manuel Lopez Obrador insisted that all nations of the hemisphere should be included, a stance backed by several other regional leaders who nonetheless agreed to come.

Biden is separately expected to meet President Jair Bolsonaro of Brazil, Latin America’s most populous nation, despite rising fears that the Trump ally will not accept the legitimacy of upcoming elections.