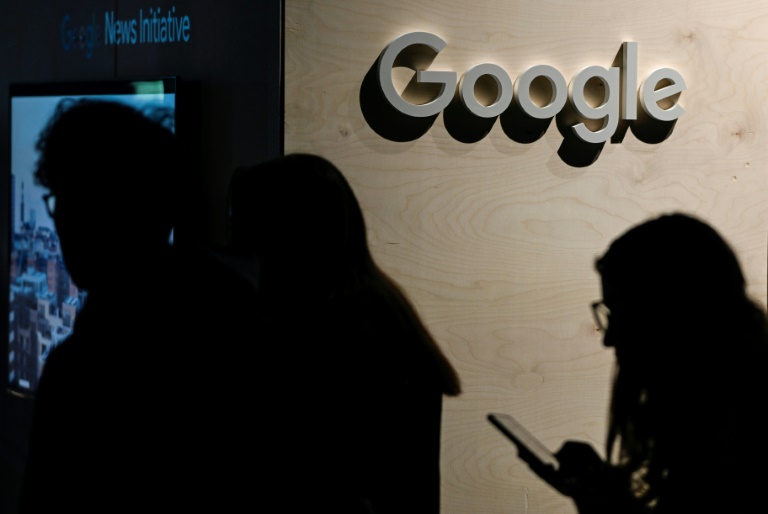 Google said on Sunday that it was “very pleased” to be settling, without admission of wrongdoing, a class-action lawsuit that argued it underpaid female employees and assigned them lower-ranking positions.

The $118 million settlement covers about 15,500 female employees who have worked for the company in California since September 2013, the law firms Lieff Cabraser Heimann &amp; Bernstein LLP and Altshuler Berzon LLP said in a statement released Friday night.

The company also agreed for a third party to analyze its hiring and compensation practices as part of the settlement.

In a statement to AFP, Google said that “while we strongly believe in the equity of our policies and practices, after nearly five years of litigation, both sides agreed that resolution of the matter, without any admission or findings, was in the best interest of everyone, and we’re very pleased to reach this agreement.”

In 2017, several former Google employees sued the company in a San Francisco court, accusing it of paying women less than men for equivalent positions and assigning women lower positions than men with similar experiences because they had previously earned smaller salaries.

According to a copy of the agreement released by the law firms, “Google denies all of the allegations in the lawsuit and maintains that it has fully complied with all applicable laws, rules and regulations at all times.”

A judge must still approve the agreement, the two law firms for the plaintiffs said.

Google previously agreed in 2021 to pay $3.8 million to the US Department of Labor over accusations it had discriminated against women and Asians. 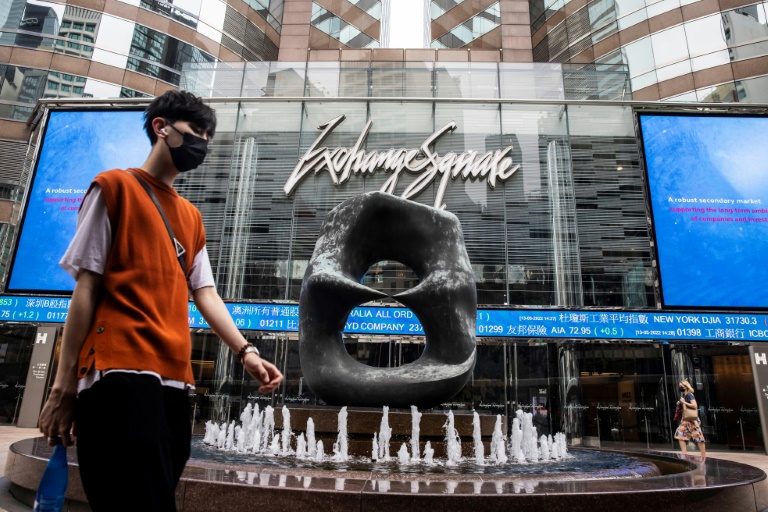 Markets tumbled in Asia on Monday and the dollar rallied as part of a global rout fuelled by a forecast-beating US inflation print that ramped up bets on a more aggressive campaign of Federal Reserve interest rate hikes.

The possibility of more restrictions in China’s biggest cities also weighed on oil prices, with concerns about a possible US recession and the stronger dollar adding to downward pressure on the black gold.

Investors were left surprised Friday when data showed US inflation jumped 8.6 percent in May, the fastest pace since December 1981, as the Ukraine war and China’s lockdowns pushed energy and food prices.

The reading has led to fervent speculation that the Fed will now be contemplating a 75 basis point lift in interest rates at some point, though it is still expected to stick to a flagged half-point hike when it meets this week.

With the central bank forced to be more aggressive, there is a concern that the US economy could be sent into recession next year.

“For the last few weeks, there has been a cautious calm in markets — rates not pricing anything unforeseen, and equities able to make small gains,” said SPI Asset Management’s Stephen Innes.

“But the strength of (US consumer prices) completely upended that apple cart.

“The market is now thinking much more about the Fed driving rates sharply higher to get on top of inflation and then having to cut back as growth drops.”

And Bank of Singapore chief economist Mansoor Mohi-uddin added that officials would likely lift borrowing costs 50 basis points for the next four meetings and eventually push the overall rate to 4.0 percent in 2023.

Wall Street’s three main indexes tanked, with the Nasdaq taking the heaviest blow as tech firms — which are susceptible to higher rates — were battered, while European markets were also hammered.

Goldman Sachs analysts said in a note: “At some point financial conditions will tighten enough and/or growth will weaken enough such that the Fed can pause from hiking.

“But we still seem far from that point, which suggests upside risks to bond yields, ongoing pressure on risky assets, and likely broad US dollar strength for now.”

The dollar continued to push higher on expectations for a sharp increase in US rates, hitting multi-year highs against its peers and flirting with a 24-year peak versus the yen.

“The yen is, sooner rather than later, going to come under renewed selling pressure” if the Bank of Japan does not change its loose monetary policy, Rob Carnell at ING Groep told Bloomberg Television.

“I think it’s a question of when rather than if with them.”

Parts of Shanghai were put back into lockdown and officials carried out mass testing on millions of people, just weeks after lifting strict measures in the country’s biggest city. 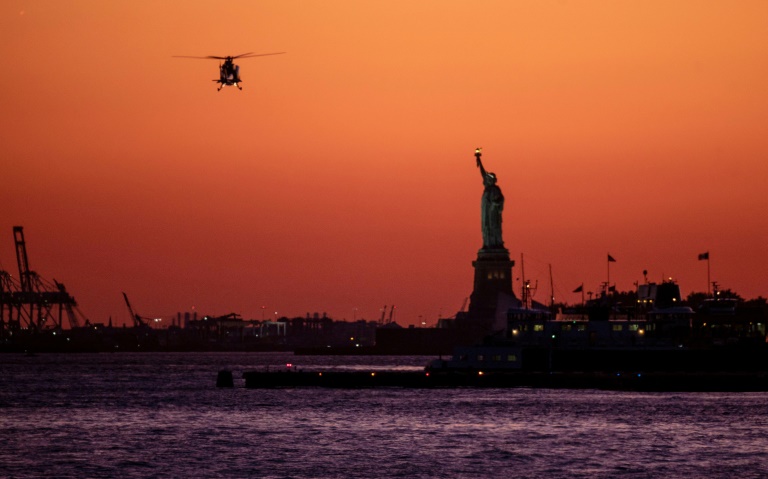 After a period of blissful silence overhead due to the Covid-19 pandemic, New Yorkers are dealing again with a familiar problem: noisy helicopters.

“They pollute our air, creating noise pollution which has negative health impacts,” the 56-year-old told AFP.

New York regularly hums with the whirr of helicopters circling the skies as tourists eye the city from above during short, pricey, sightseeing tours.

They also transport wealthy residents keen to avoid traffic jams on their way to holiday homes by the beach in the plush Hamptons.

Elstein is far from the only New Yorker unhappy at the near-constant din caused by the tens of thousands of flights every year.

Some respite may be in the offing.

Earlier this month, the New York state legislature approved a bill that could see companies fined $10,000 a day for generating “unreasonable” noise levels.

If Governor Kathy Hochul signs it into law, it would be the first piece of state legislation to tackle noise pollution from the helicopters.

Senator Brad Hoylman, who sponsored the bill, said that “many New Yorkers can no longer work from home comfortably, enjoy a walk along the waterfront, or keep a napping child asleep because of the incessant noise and vibrations from non-essential helicopter use.”

He noted that one helicopter produces 43 times more carbon dioxide per hour than an average car.

“Helicopter noise is not just annoying, it’s detrimental to our health and our environment,” Hoylman said in a statement.

For Andy Rosenthal — president of Stop the Chop, an organization of volunteers seeking to ban non-essential helicopter flights — the legislation does not go far enough.

“It’s a good first step. (But) it is not what we had hoped for. The fight continues,” he said.

New York City has three active heliports: two in Midtown on the Hudson and East rivers, used for corporate and chartered flights, and another near Wall Street in lower Manhattan, from which tourist flights depart.

Amid complaints, the administration of then-mayor Bill de Blasio agreed with the industry to reduce the number of tourist flights per year from 60,000 to 30,000, starting in 2017.

They also restricted tourist rides departing New York City to airspace over the rivers surrounding Manhattan, banning them from soaring above land.

Sightseeing helicopters taking off from New Jersey are allowed to fly above Manhattan though, including Central Park.

“This is an industry that doesn’t have to exist, shouldn’t exist. (Just) for the convenience of the very few,” said Elstein.

Some residents, though, have become used to the sound and accept it as a fact of living in America’s bustling financial, cultural and tourism capital.

“It’s a background noise,” said Mark Roberge, who lives near the heliport at the southern tip of Manhattan.

“It seems to be part of the experience.” 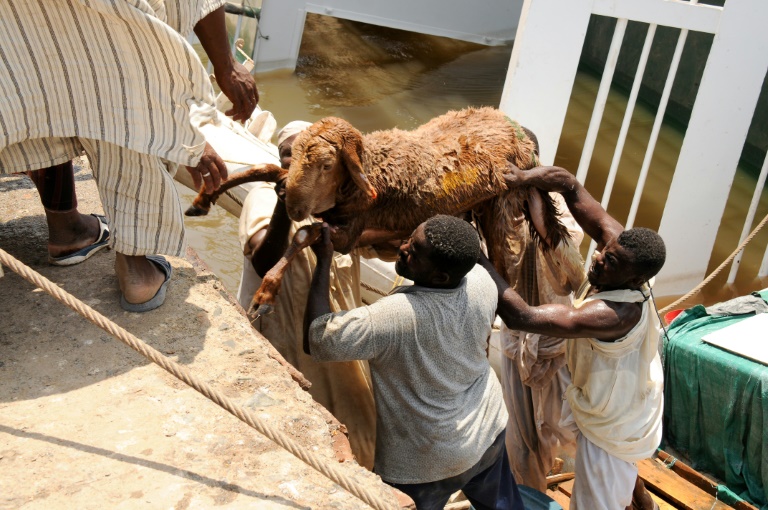 An overladen ship crammed with thousands of sheep sank Sunday in Sudan’s Red Sea port of Suakin drowning most animals on board but with all crew surviving, officials said.

The livestock vessel was exporting the animals from Sudan to Saudi Arabia when it sank after several thousand more animals were loaded on board than it was meant to carry.

“The ship, Badr 1, sank during the early hours of Sunday morning,” a senior Sudanese port official said, speaking on condition of anonymity. “It was carrying 15,800 sheep, which was beyond its load limits.”

The official said the ship was supposed to carry only 9,000 sheep.

Another official, who said that all crew were rescued, raised concerns over the economic and environmental impact of the accident.

“The sunken ship will affect the port’s operation,” the official said.

“It will also likely have an environmental impact due to the death of the large number of animals carried by the ship”.

Omar al-Khalifa, the head of the national exporters’ association, said the ship took several hours to sink at the pier — a window that meant it “could have been rescued.”

The total value of the lost livestock “is around 14 million Saudi riyals, the equivalent of four million dollars,” said Saleh Selim, the head of the association’s livestock division, confirming also that the sheep were loaded onto the vessel at Suakin port.

He said livestock owners recovered only around 700 sheep “but they were found very ill and we don’t expect them to live long.”

Selim called for an investigation into the incident.

Last month, a massive fire broke out in the cargo area of Suakin port, lasting hours and causing heavy damage. It was not clear what caused the blaze.

An investigation has been launched to determine the cause of the fire, but has yet to release its findings.

The historic port town of Suakin is no longer Sudan’s main foreign trade hub, a role which has been taken by Port Sudan, some 60 kilometres (40 miles) away along the Red Sea coast.

There have been moves to redevelop Suakin port, but a 2017 deal with Turkey to restore historic buildings and expand the docks was suspended after the ouster of longtime president Omar al-Bashir.

The military takeover triggered punitive measures, including aid cuts by Western governments, who demanded the restoration of the transitional administration installed after Bashir was toppled.