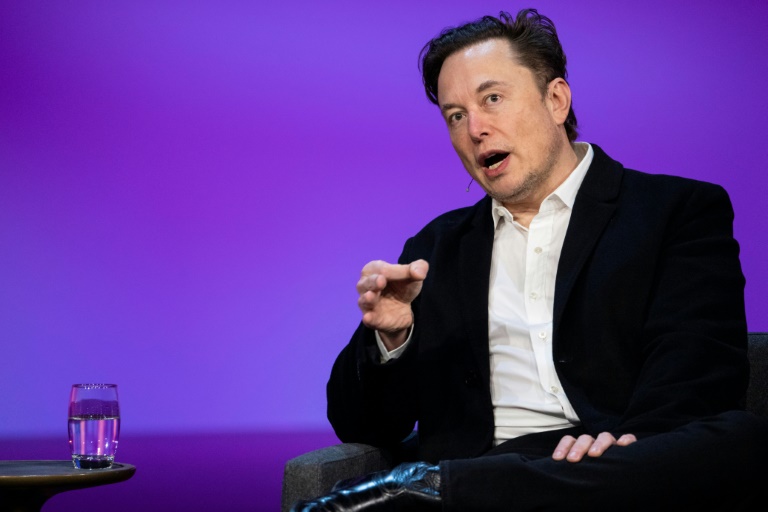 Billionaire Elon Musk will address Twitter employees at a meeting this week, the company confirmed Tuesday, in a first since launching his troubled $44 billion bid for the social media platform.

The meeting is set for Thursday and comes as Musk is in a standoff with Twitter’s leadership over the service’s user numbers that have put the buyout in doubt.

Twitter, referring to the gathering, said “We can confirm this is true and happening.”

Since Musk’s takeover move became public in April, Twitter has been roiled by uncertainty over its future but also by concerns about being led by the mercurial Tesla chief.

Musk has advocated a less restrictive approach to what users can post on Twitter and is on record saying he would lift the ban the platform slapped on former US president Donald Trump — a highly polarizing decision.

The idea of Musk taking over Twitter has also stoked protest from critics who warn his stewardship will embolden hate groups and disinformation campaigns.

Musk has threatened to withdraw his bid, accusing Twitter of failing to provide data on fake accounts, but the company has since reportedly agreed to provide him access.

Some observers have seen Musk’s questioning of Twitter bots as a means to end the takeover process, or to pressure Twitter into lowering the price. 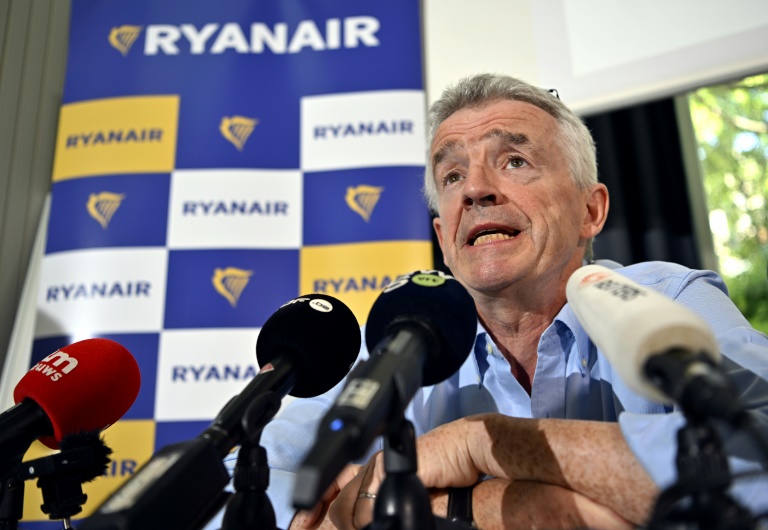 Air travel chaos in Britain is purely down to Brexit “shambles” by hobbling recruitment at airports, Ryanair boss Michael O’Leary said on Tuesday.

The CEO of Europe’s biggest airline also dismissed threats of summer strike action by what he called “Mickey Mouse” unions in Belgium and Spain covering some Ryanair workers.

And he said his company has dropped a controversial pre-boarding questionnaire for South African passport holders requiring them to answer questions in Afrikaans — a language commonly used by just 12 percent of South Africans, many of them white.

O’Leary told AFP that “100 percent” of the woes experienced by air passengers in the UK — including massively long lines and cancelled flights — was because “Brexit has been a shambles”.

“It was delivered by a government led by Boris Johnson that is also a shambles. It was inevitable that Brexit would constrain the labour market, you see,” he said.

O’Leary said Britain’s decision to pursue a hardline departure from the European Union that put a halt to EU workers filling jobs is largely why it was difficult to quickly ramp up recruitment for ground and security staff at UK passports.

Airports and airlines in several countries, including in the EU and the US, have struggled to cope with surging numbers of travellers, many of them keen to fly after months or years of being grounded because of Covid restrictions.

O’Leary said that unlike European rivals Air France and Lufthansa, low-cost Ryanair had fully bounced back from the pandemic and was flying 115 percent of the passenger loads recorded before the coronavirus hit.

Rising inflation was only pushing more passengers into Ryanair seats, he argued, while acknowledging that the airline was raising ticket prices by around 9 percent.

He said the company’s hedging on fuel prices through to March next year was keeping it competitive.

But unions in Belgium and Spain are threatening to clip Ryanair’s peak summer revenues with strikes later this month to demand better pay and conditions.

O’Leary shrugged off the walk-out warnings.

“We think there will be very few strikes, if any, and those strikes will be meaningless and won’t be noticed by anybody,” he said.

“We operate two and half thousand flights every day. Most of those flights will continue to operate even if there is a strike in Spain by some Mickey Mouse union or if the Belgian cabin crew unions want to go on strike over here,” he added in a media conference.

O’Leary said that, in Belgium, the airline had “reached agreement with the unions representing over 90 percent of our pilots and cabin crew” and was continuing negotiations.

On the controversial Afrikaans test, the Ryanair boss said the company had tried to respond to a rise in detection of false South African passports.

“We suffer a fine of 2,000 euros for every passenger who arrives in Dublin from Bodrum (in Turkey) with a false South African passport,” he said.

He added that, while the airline had been asking South African passport holders to answer local general knowledge and geographical questions in Afrikaans, it got rid of the questionnaire.

“We didn’t think it was appropriate either. So we have ended the Afrikaans test, because it doesn’t make any sense,” he said, adding that “South Africa needs to fix its problems”.

Afrikaans is just one of 11 official languages in South Africa, and it played a role in the oppression of black citizens during apartheid. 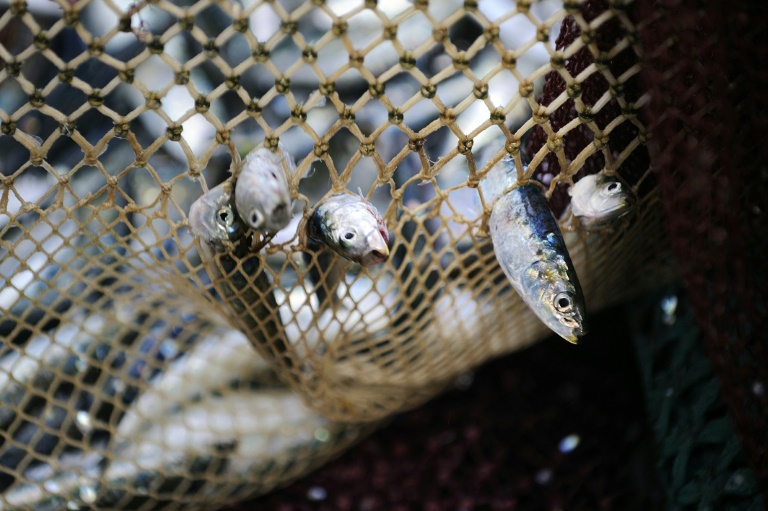 The WTO tried to net a long-sought deal on curbing harmful fishing subsidies by promising Tuesday an implementation fund it hopes will reel in wavering developing countries.

Negotiations have been going on at the World Trade Organization for more than 20 years towards banning subsidies that threaten the sustainability of the planet’s fish stocks by encouraging overfishing.

The global trade body’s leader, Ngozi Okonjo-Iweala, wants to pull off a major coup by finally concluding a deal at the WTO’s first ministerial conference in nearly five years, being held in Geneva this week.

There are hopes that a financing fund to help developing countries implement the new rules may help soothe lingering concerns.

“We’ve been discussing and progressively refining this idea with a sizable group of members on both sides — both potential donors and potential beneficiaries,” Okonjo-Iweala explained.

The idea is to provide members with the means to build up their capacities to integrate the new rules, involving adopting systems to manage their fisheries and provide catch data.

The fund is targeting around $20 million in contributions, with a starting amount of around $10 million — of which $5 million has already been pledged.

“While work is continuing on the last remaining issues, we have never been so close to concluding,” said Colombia’s WTO ambassador Santiago Wills, who chairs the fisheries negotiations at the organisation.

However, a Geneva-based diplomat said the financing mechanism was helpful but was not a major issue in the negotiations, which still revolve around the carve-outs for certain developing countries and whether they would apply to China and India.

“It’s a nice thing to have and will help in the implementation of the agreement but it’s not going to make the deal — sadly,” the diplomat said.

“That would be an extraordinary deliverable for this week if we could actually get there,” but “right now, people aren’t sure we’re going to”.

Special treatment for the poorest countries is widely accepted, but demands from some self-identified developing countries for exemption from subsidy constraints, including large fishing nations like India, have met resistance.

He told his counterparts that there was an “historic opportunity for the WTO to do something that will massively benefit the world for many generations to come, and that we simply cannot, and must not, miss this opportunity,” WTO spokesman Daniel Pruzin told reporters.

Besides fisheries, the WTO is trying to strike deals on e-commerce, agriculture, food security, Covid-19 vaccine patents and WTO reform.

Okonjo-Iweala warned countries against trying to do trade-offs between the different tracks.

Agreements at the WTO are reached by consensus, meaning objections from any one of the 164 members can stymie talks towards a deal.

Okonjo-Iweala — who turned 68 on Monday — took over as WTO director-general in March 2021, and has staked her reputation on breathing new life into the crippled organisation.

“We all have dreams and sometimes not all of those dreams can be fulfilled,” she said Tuesday.

“My own dream for my birthday is to get a successful ministerial.

“One or two packages passed… I think that would do.”

But several diplomats have indicated that India is proving the main obstacle in securing any agreements at the conference.

“India is being obstructive across the piece,” said one Geneva-based diplomat.

“In no negotiation are they playing a constructive part.” 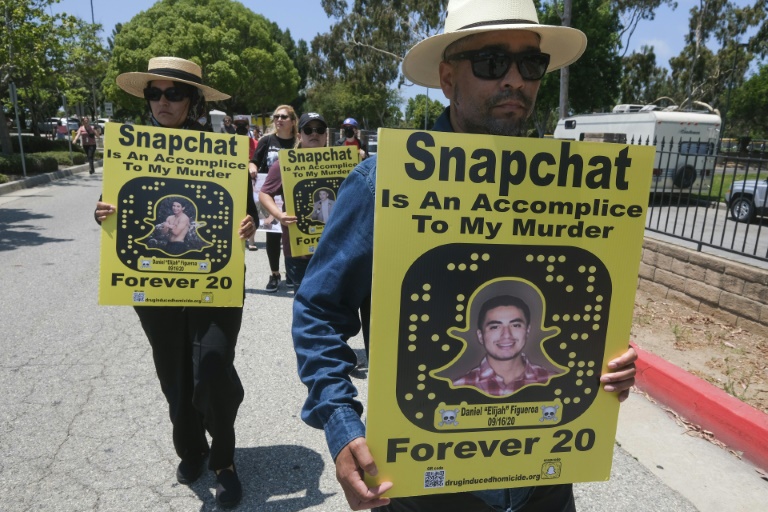 Families of teens who died after overdosing on drugs they bought through Snapchat and other social media platforms called Monday for tech firms to do more to address the problem.

Sam Chapman, part of a group that staged a protest Monday in front of Snapchat’s Santa Monica headquarters, told AFP his son died in February 2021 after a pill he purchased through the platform was laced with the extremely powerful opioid fentanyl.

“I’m here today to warn people about the dangers of social media, delivering drugs and other criminal acts into the lives of our families, through our children,” said Chapman, 57.

His son Sammy would have celebrated his 18th birthday last weekend.

Chapman described the horrific scene of finding his son dead on the floor in his bedroom, in what he said was called the “fentanyl death pose.”

“He had stopped breathing and fell backwards in his chair and vomited, and he choked on his own vomit… It’s a very common way of going,” said Chapman.

Of the 107,000 overdose deaths recorded last year in the United States, 70 percent were caused by “fentanyl poisoning,” which is now the leading cause of death for Americans aged 18 to 45, according to the groups backing Monday’s protest.

Chapman said a drug dealer had contacted his son on Snapchat, and sent him a “colorful drug menu with pictures.”

“At the bottom it said that he delivered. And so he connected with our son and delivered the drugs to our home after we were asleep, like it was a pizza,” he added.

Like the other victims’ family members, Chapman is calling on Snapchat and other social media platforms geared toward young people to take stronger action against drug sales.

“We have been working tirelessly to help combat this national crisis by eradicating illicit drug dealers from our platform,” a Snapchat spokesperson told AFP.

“We use advanced technology to proactively detect and shut down drug dealers who try to abuse our platform, and block search results for dangerous drug-related content,” the representative added.

But Chapman said the tools currently in place do not work because dealers use emojis and code words that aren’t blocked.

The group Victims of Illicit Drugs (VOID) is demanding US law to be updated so that social networks are held liable for what happens to their users on their platforms.

“If you’re walking in a grocery store, you slip and fall, you can sue them,” said VOID president Jaime Puerta.

“The legislators had no idea of where the internet would be today.”