Spanish unions called on staff at low-cost airline Ryanair on Monday to hold a six-day strike at the start of the summer holidays, the latest action by aviation industry workers to demand better conditions in Europe.

The planned work stoppage could cause more travel headaches in Europe, where strikes and shortages of staff have hit a sector that has started to recover from the Covid pandemic.

The call for flight crew to walk out from June 24 to July 2 aims to push Ireland’s Ryanair to reach a deal that “guarantees decent work conditions for all personnel” at the airline, the USO and SITCPLA unions said in a joint statement.

Ryanair is the only international airline that does not have a collective bargaining agreement that defines workplace conditions for its Spanish employees, according to the trade unions.

It finally agreed to negotiate with trade unions eight months ago, but ended talks after reaching a deal, which includes minimum pay and flight hours previsions, with one union that does not have a majority among flight crew.

Both the USO and SITCPLA unions believe that the agreement is insufficient and doesn’t respect Spanish labour law.

The strike would come as summer holidays get underway in European countries and a recovery in air travel following the lifting of most Covid-19 travel restrictions.

The boom in demand has caught short some airlines and airports that shed staff during the pandemic and which are having trouble rehiring employees as well as facing demands for wage hikes and better working conditions.

Staff shortages have disrupted flights in London, Amsterdam and Frankfurt in recent weeks.

Strikes at Paris’s main airport on Thursday led to a quarter of flights being grounded, runways closed and passengers delayed

Nearly 1,000 SAS pilots have threatened to go on indefinite strike from the end of June after talks broke down with the Scandinavian airline. 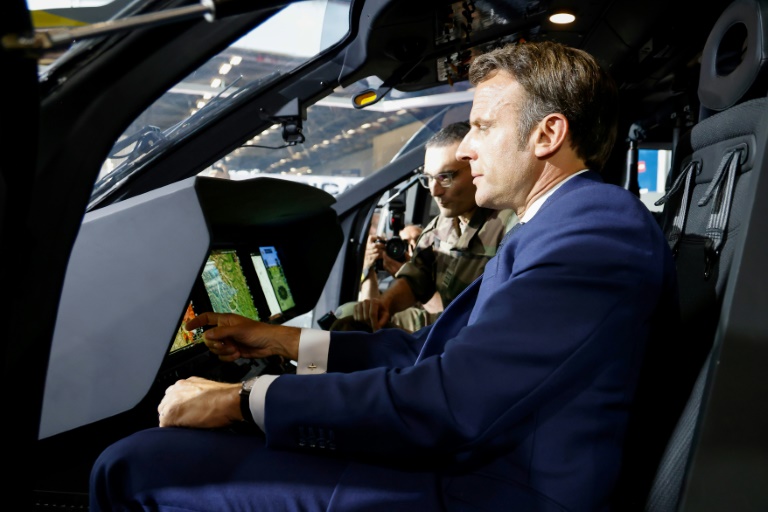 Speaking at Eurosatory, a weapons industry fair, Macron said Europe needed “a much larger defence industry” to avoid relying on suppliers elsewhere for its equipment needs.

Since Russia’s invasion of Ukraine in February, France “has entered into a war economy in which I believe we will find ourselves for a long time”.

Macron said he had asked the defence ministry and armed forces chiefs of staff to adjust a six-year framework defence spending plan running to 2025 to the new geopolitical situation, to “match the means to the threats”.

Even before Ukraine, French military spending had gradually increased since Macron came to power in 2017 to reach 41 billion euros ($43 billion) this year, and is currently scheduled to hit 50 billion euros in 2025.

“We didn’t wait for strategic changes to re-invest,” Macron said, but Russia’s war had created “an additional need to move faster and become stronger at a lower cost”.

Macron said that “anybody doubting the urgency of these efforts only needs to look to Ukraine, where soldiers are asking for quality weaponry and they are entitled to a response from us”.

According to Le Monde newspaper, the government’s armament agency DGA is considering a draft law that would allow the requisitioning of civilian equipment or civilian factories to make weapons.

“Let’s not repeat the errors of the past going forward,” he said. “Spending large sums on purchases from elsewhere is not a good idea.”

Europe needs a defence industry that is “much stronger and much more ambitious” than now, he said, “or we will create our own future dependencies”.

A European fighter plan project is, according to experts, currently running about a decade late, while a new French-German battle tank project, MGCS, is not expected to be operational for nearly another two decades.

The WTO’s search for a role in fighting the pandemic sharpened up on Monday as ministers seek a compromise to lift intellectual property rights on Covid-19 vaccines.

The World Trade Organization’s first ministerial meeting since December 2017 is wrestling with the wording of a text that would temporarily waive patents on coronavirus jabs.

It is the main pandemic-combating idea being negotiated at MC12, the global trade body’s 12th ministerial conference, being held from Sunday to Wednesday at its headquarters in Geneva.

But serious objections remain from some of the countries that host major pharmaceutical companies, like Britain and Switzerland — a problem at the WTO, where decisions are taken by consensus rather than by majority.

The world’s big pharma firms are dead set against the idea, insisting that stripping patents will cripple investment and innovation.

They also say the plan — first proposed in October 2020 when the pandemic was raging and before jabs were even rolled out — has gone past its sell-by date as the world now has a surplus of vaccine doses rather than a dearth.

After Sunday’s opening ceremony and countries setting out their positions, ministers from the 164 WTO members went into rooms at the organisation’s HQ — the grand 1920s, classical Florentine-style Centre William Rappard on Lake Geneva — to start talking it out face to face.

This week’s conference is a crunch moment for WTO chief Ngozi Okonjo-Iweala, who has staked her leadership on breathing new life into the crippled organisation, where progress has been stumbling for years.

The Nigerian former finance and foreign minister took over in March 2021 on a mission to make the WTO relevant again.

But on her 68th birthday Monday, there was no immediate sign of a breakthrough on vaccine patents.

Public interest groups say the draft text falls far short of what is needed, by time-limiting and complicating the vaccine patents waiver — and by leaving out Covid treatments and diagnostics.

“The WTO rules are contributing to exacerbating the pandemic, because it’s the WTO that enforces IP rules,” demonstration organiser Deborah James told AFP.

“Folks have been campaigning on this for two years and it’s been a complete wall by a few countries,” she said.

“It’s an indictment of the WTO system: it’s completely broken, it can’t respond to a pandemic, it has no ability to put anything other than maximising profits for corporations ahead of anything else.”

In October 2020, India and South Africa began pushing for the WTO to lift IP rights on Covid-19 vaccines, tests and treatments to help ensure more equitable access in poorer nations.

After multiple rounds of talks, the United States, the European Union, India and South Africa hammered out a compromise.

The text would allow most developing countries, although not China, to produce Covid vaccines without authorisation from patent holders.

Beijing has promised not to use the facilities granted to developing countries in the draft agreement, but, according to several diplomats, Washington wants this commitment in writing.

“In a pandemic, sharing technology is life or death and we are choosing death,” said the UNAIDS agency’s executive director Winnie Byanyima.

Besides production, a second text being negotiated seeks to tackle some of the supply constraints faced by certain countries in getting hold of Covid-fighting tools.

And beyond the pandemic, the WTO faces pressure to eke out long-sought trade deals on a range of issues and show unity amid an impending global hunger crisis.

Okonjo-Iweala voiced cautious optimism on Sunday that ministers could reach agreement on food security threatened by Russia’s invasion of Ukraine, overfishing and on Covid vaccines.

She said to expect a “rocky, bumpy road with a few landmines along the way”.

Bitcoin tumbled Monday to an 18-month low under $25,000 as investors shunned risky assets in the face of a vicious global markets selloff, months after the cryptocurrency hit a record high.

World stock markets have plunged since Friday when data showed US inflation at a fresh four-decade high, increasing recession fears and sending investors running for safer assets like the dollar.

“It is not very surprising to see such a strong downturn as we have noticed an increased correlation over the last few years between traditional stocks, which have also tanked recently, and the cryptocurrency market,” noted XTB chief market analyst Walid Koudmani.

The world’s most popular cryptocurrency dived about 10 percent to hit $23,794 in morning London deals, striking a level last seen in December 2020.

The virtual unit has collapsed by 65 percent in value since striking a record peak $68,991.85 in November.

Investors on Monday sought safety with the US central bank seen likely to aggressively ramp up borrowing costs further to combat runaway inflation.

Bitcoin’s decline accelerated after the news from Celsius Network.

“Today we are announcing that Celsius is pausing all withdrawals, swap, and transfers between accounts,” the platform said in a statement.

Celsius made the move “due to extreme market conditions”, it added.

The total value of customer deposits had already shrunk by more than half to under $12 billion in May compared with the end of last year.

Koudmani said further falls for bitcoin “may trigger a cascading effect of liquidations of hedging positions” taken against the cryptocurrency.

The global crypto market, comprising other virtual currencies which are tanking such as Ethereum, is worth about $1 trillion, according to crypto data aggregator CoinGecko.

That is down from a level of more than $3 trillion at its peak seven months ago, when the market rode a wave of massive investor demand amid growing acceptance from large financial institutions.

In a sign of the growing importance of cryptocurrencies, two countries, El Salvador and the Central African Republic, have taken the gamble of adopting bitcoin as legal tender — despite strong criticism from international financial institutions.