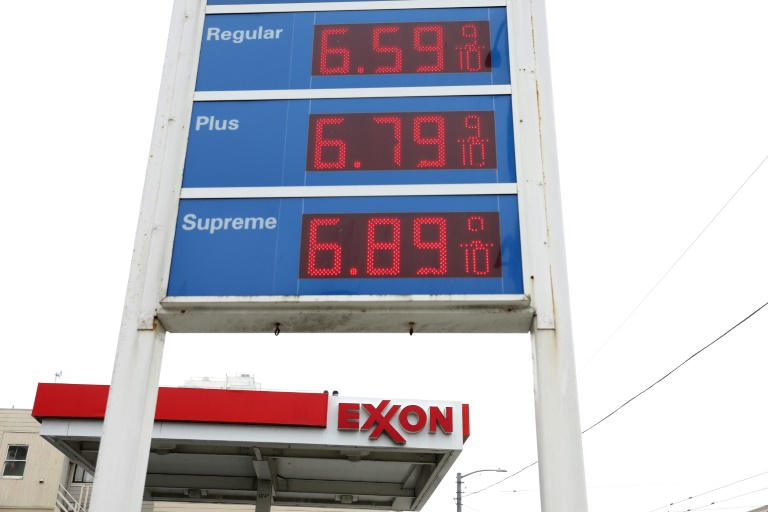 US gasoline prices have fallen from historic highs earlier in the summer, a retreat highlighted by a politically beset White House as a sign of moderating inflation.

President Joe Biden, who has seen his approval rating tumble amid the worst pricing pressures in decades, took to Twitter to point out that prices at the pump have fallen for more than a month, saving the average driver about $25 a month.

“I know those extra dollars and cents mean something. It’s breathing room,” Biden tweeted Monday night. “And we’re not done working to get prices even lower.”

Since hitting an all-time high of $5.016 a gallon on June 14, prices have fallen the last 35 days amid rising worries over economic growth and an easing in the physical crude oil market.

Gasoline prices are now at a national average of $4.495 per gallon, down 10 percent from a month ago but up 42 percent from the year-ago level, according to the American Automobile Association.

The biggest factor in the pullback has been the drop in crude oil prices due to worries that a slowing economy or recession will dent energy demand.

Crude prices rose to around $130 a barrel soon after the Russian invasion of Ukraine prompted fears of the loss of a major supply source at a time of rising demands.

Analysts say those fears were generally not realized and that most Russian crude oil has continued to flow to buyers in markets such as India and China.

Compared with March, US crude oil production has also risen about 400,000 barrels a day, according to US data.

The added US production, coupled with more Saudi oil added in the recent period, means the tightness of the crude market “has eased,” said Again Capital’s John Kilduff, who also cited as a factor unusually tepid gasoline consumption shown in the most recent weekly US energy report.

Some of the drop in gasoline use likely is a response to price. But it also reflects shifting labor practices after the pandemic.

“Up until the pandemic, work from home was kind of considered an outlier,” said Bill O’Grady, chief market strategist of Confluence Investment Management.

Under today’s more flexible arrangements, “when the gasoline price goes up, instead of coming in five days a week, you may only come in three or two,” O’Grady said.

A White House memo predicted gasoline prices would continue to fall through the “near term,” highlighting Biden’s actions such as a historically large release of oil from the Strategic Petroleum Reserve — which analysts think had its primary impact as soon as it was announced in late March.

The White House memo also noted that the decline in gasoline prices has gotten a fraction of the media coverage that the run-up in prices earlier in the spring received.

“Despite the data, you wouldn’t know gas prices are coming down from watching the evening news or reading the paper,” the memo said.

“My forecast is for prices to continue to slide lower into the fall,” Kilduff said, adding that prices will remain high by historical standards.

While O’Grady thinks prices will continue to fall, he added that there is always a risk in late summer that Gulf of Mexico hurricanes could impair key refineries.

“That can send gasoline prices up significantly,” he said. 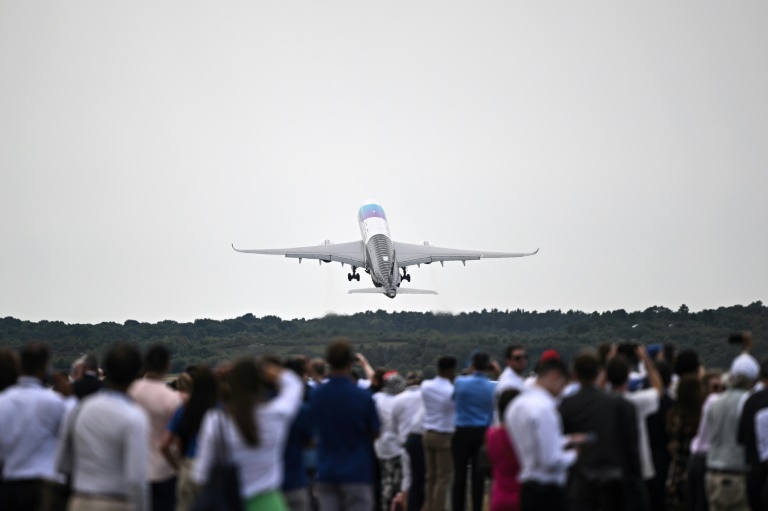 European planemaker Airbus trailed its fierce US rival Boeing in an orders battle on the second day of the Farnborough airshow on Tuesday, as southern England buckled under a record heatwave.

Airbus finally opened its orders account with a $1.1-billion order for 12 Airbus A220-300 passenger jets from Delta Airlines.

The new jets are due for delivery from 2026, and bring its total firm A220 order to 107 of the single-aisle aircraft.

However, Boeing already had the upper hand after clinching a $13.5-billion order for Boeing’s crisis-hit MAX from Delta on the first day of Farnborough on Monday.

The US carrier ordered 100 medium-haul MAX jets with an option for 30 more, and swiftly afterwards Japan’s ANA agreed to buy 20 MAX 8 jets worth $2.4 billion.

The MAX jet, which suffered two deadly crashes in 2018 and 2019, is experiencing a rush of interest at this year’s five-day Farnborough spectacle southwest of London.

Independent aviation analyst Howard Wheeldon said customers were giving the MAX a thumbs-up, at an airshow where Boeing normally saves its biggest deal for the end.

“This is a vote of confidence and a sign that they are now moving forward from the MAX crisis and in the right direction,” Wheeldon told AFP.

Boeing then won another massive boost Tuesday as investment fund 777 Partners ordered up to 66 of the MAX passenger aircraft worth a combined $8 billion.

Customers are expected to win a discount on list prices as is traditionally the case for big orders.

Wheeldon sounded a note of caution over the post-Covid recovery despite growing sector-wide optimism over the outlook at the airshow.

“There will be other orders but none of this suggests that the industry itself is moving forward,” added Wheeldon.

“Ticket prices have risen steeply and aircraft are far from full. Shortage of staff and other skills continues to impact and there are no quick fixes.

“This is an industry that has been in turmoil because of Covid but also one that knows the pressures from other factors such as climate change and rising costs are not easily solved.”

Aviation analyst John Strickland said the latest edition of Farnborough — the first since 2018 — was not “flush” with orders.

But “it marks a moment of rehabilitation for Boeing”, he added.

Farnborough this year partly focuses on the themes of decarbonisation and sustainability in a sector often criticised for its impact on emissions and climate change.

The UK government has launched a new “Jet Zero” strategy and vowed that aviation emissions should not return to pre-Covid levels.

Yet environmental campaign group Greenpeace has slammed the strategy as a short-term move that shifted responsibility away from government.

Greenpeace UK programme director Emily Armistead dismissed the plan as “vague aspirations to technological innovation”, which would fail to cut emissions in the short to medium term.

She accused the government of failing to have the courage to regulate aviation emissions.

“This isn’t a plan to do that, just a delaying tactic and a very expensive waste of time,” she added. 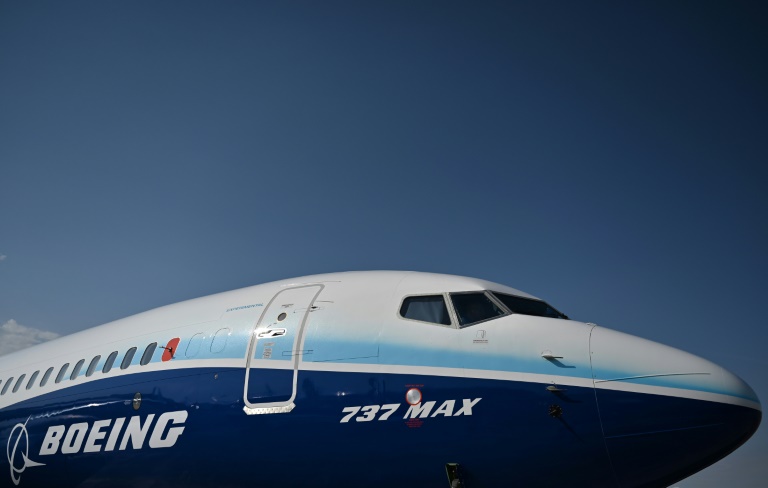 US planemaker Boeing won a fresh boost Tuesday for its crisis-hit MAX aircraft, as investment fund 777 Partners ordered up to 66 of the passenger aircraft worth a combined $8 billion.

The announcement, on the second day of Farnborough airshow, comprises a firm order for 30 medium-haul single-aisle 737 MAX-8-200s plus options to purchase up to 36 more from the same family.

The Miami-based fund operates Flair Airlines in Canada and Bonza Aviation in Australia.

Josh Wander, the fund’s managing partner and co-founder, said the MAX-8-200 jets — configured with more seats than the MAX-8 — would help ramp up the capacity of both carriers.

“This new order marks another milestone in the robust growth of our aviation businesses and concurrently, our partnership with Boeing,” Wander added in a statement.

The MAX jet, which suffered two deadly crashes in 2018 and 2019, is experiencing a rush of interest at this year’s Farnborough, southwest of London.

US airline Delta on Monday announced a deal to buy 100 MAX passenger aircraft worth a combined $13.5 billion. 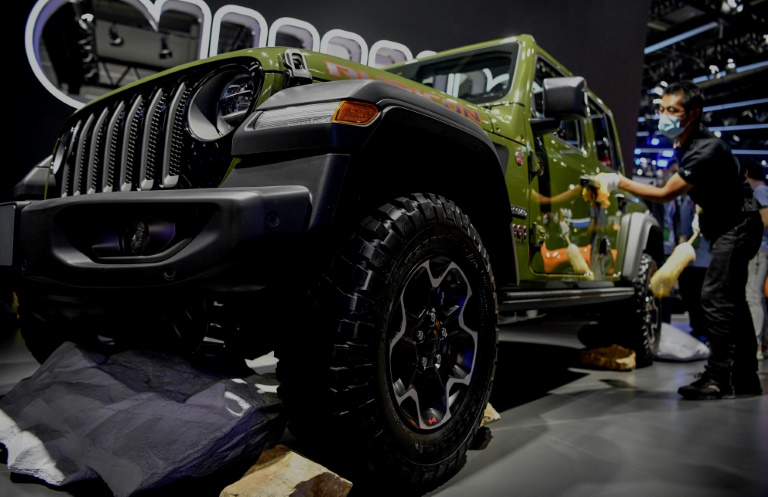 US-European carmaker Stellantis said on Monday it was ending production in China of its Jeep SUV after failing to acquire a majority stake in its joint venture with local firm GAC.

GAC-Stellantis is one of two joint ventures in China embarked on by Stellantis, which was formed in January 2021 last year by the merger of Fiat-Chrysler and PSA.

“Stellantis intends to cooperate with GAC Group in an orderly termination of the joint venture formed in March 2010, which has been loss-making in recent years,” the group said.

It said the move was “due to a lack of progress in the previously announced plan for Stellantis to take a majority share” in the business.

The decision to wave goodbye to GAC would show up as “a non-cash impairment charge of approximately 297 million euros ($302 million) in its first-half 2022 results”, due out on July 28.

Stellantis said it would henceforth “focus on distributing imported vehicles for the Jeep brand in China”.

The group — which also includes the Peugeot, Alfa Romeo and Citroen brands — had hoped to increase its stake in China Guangzhou Automobile Group (GAC) to 50-75 percent.

The move was made possible by a change in Chinese regulations allowing deeper involvement by foreign investors, on condition they obtain Beijing’s approval.

Stellantis told AFP its decision to pull out was “not linked” to a decision by the Chinese government.

The group had announced in January that the acquisition of the hoped-for majority stake in the joint venture with GAC was the first step towards streamlining its activities in the world’s biggest vehicle market.

GAC protested at the time because the deal had not been signed.

Jeep, which is rolling out electric vehicles, was to be one of Stellantis’s main conduits for expanding in China.

Stellantis’s main activity in China is the manufacture and sale of Peugeots and Citroens, via a joint venture with local automaker Dongfeng.

China is also a key market for its luxury Maserati brand and a target for its premium brand DS.

Jeep sold just 20,000 vehicles in China in 2021 and at the end of last year, GAC-Stellantis terminated production at one of its two assembly lines.

Jeep is now concentrating on offering a wider array of imported electric vehicles.